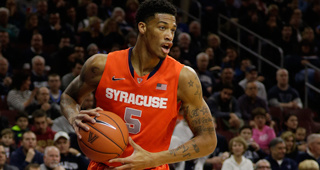 McCullough, 6-foot-10, tore his anterior cruciate ligament in January. He had averaged 9.3 points, 6.9 rebounds and 2.1 blocks per game prior to the injury.

McCullough deliberated on his decision late in the season to stay or leave Syracuse, but this week strongly formalized entering the draft, sources said.

Several NBA scouts viewed McCullough as a likely first-round choice before his torn ACL, but the 20-year-old still could land late in the first round or early in the second round.

McCullough, 20, grew up in New York and went to high school in Connecticut — heralded as a skilled pro prospect.