Celtics Trying To Move Up To Select Myles Turner 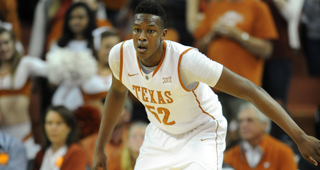 The Boston Celtics are actively attempting to trade up in next week's draft in order to select Myles Turner, according to multiple league sources.

The Celtics own the 16th overall pick in the draft and Turner is expected to be picked several slots earlier.

One of the Celtics' most pressing needs this offseason is a rim protector. Turner blocked 4.2 shots per 36 minutes in his freshman season at Texas.

The Celtics have one of the deepest collections of future draft assets in the entire NBA, with as many as four potential first rounders in 2016, which gives them considerable flexibility in attempting to move up.