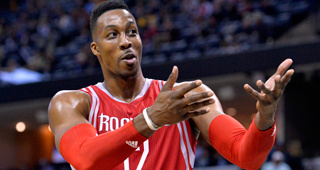 Dwight Howard was caught using stickum during the Houston Rockets game against the Atlanta Hawks.

As Howard was about to check back into the game, he sprayed his hands at the scorer’s table with a can covered in white tape.

Howard entered the game as Paul Millsap was at the free-throw line and grabbed the ball after a made attempt. When Millsap got the ball back it clearly had a foreign substance on it.

J.B. Bickerstaff tried to hide the can as referee Monty McCutchen grabbed the ball and went to each bench to issue a warning, saying ‘Stickum is illegal in the NBA.’

No penalty was enforced but the NBA is reviewing the incident.