Tyson Chandler Not Interested In Being Part Of Rebuilding Project 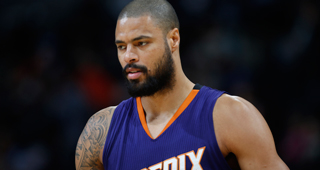 Tyson Chandler is in the first season of a four-year, $52 million deal with the Phoenix Suns.

The Suns' season fell apart and Chandler also is finally beginning to show his age.

In February, Chandler said he's "not jumping ship" but that position may be changing.

"For me, especially where I am in my career, I want to win," Chandler said Friday. "I want to win now. I'm not in any kind of rebuilding stage. So if that's the case, it ain't where I'm supposed to be."

With so much cap space available to teams this summer, it should be easier to trade Chandler than it would be in most years but the three remaining years on his deal will be difficult for teams to feel comfortable taking on.