Jose Calderon Open To Remaining With Knicks As Backup 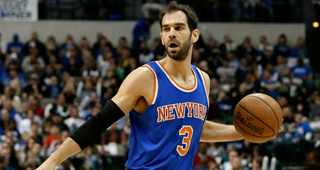 Jose Calderon is open to remaining with the New York Knicks even as a backup.

“For sure, 100 percent,’’ Calderon said Saturday. “A couple of years ago, if my team needed me to do that? I’m not the one putting me in the starting position. That’s question for coach but, yes, 100 percent.’’

The Knicks are interested in upgrading the point guard position this offseason.

Calderon doesn't have a no-trade clause as Anthony does.

“It’s still Easter — not summer yet,’’ Calderon said. “I’ll figure it out when the season is over. I don’ know what’s going to happen.”

The Knicks can create $5 million in cap space for 2016 by using the stretch provision on Calderon.