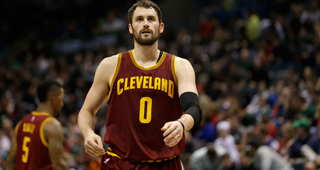 The Boston Celtics, who have been linked to Kevin Love for at least two years, may not have abandoned their pursuit of him.

Brandon Ingram, the presumed No. 2 pick in next week’s draft is also a client of Excel, but Ainge is believed to have inquired with Schwartz about whether a trade for Love could be revisited. The Celtics hold the third, 16th and 23rd picks in the draft, as well as five second-round picks. The Celtics have already been linked to Jimmy Butler of the Chicago Bulls in rumors.

Love, in his second season alongside Kyrie Irving and LeBron James with Cleveland, has been the odd man out at times. Love has a player option to become a free agent in 2019 and his contract runs through 19-20.