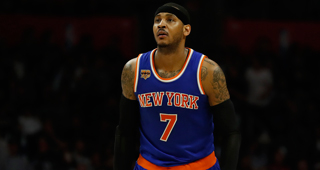 The New York Knicks nearly traded Carmelo Anthony to the Houston Rockets in early July, but they ultimately decided to not take on the contract of Ryan Anderson.

Anthony preferred to be traded to the Rockets, but the Knicks' willingness to do so appeared to change after Scott Perry became general manager.

“Even though Scott and I battled over Houston I have to respect the fact that he inherited an extremely difficult situation and that he had to do what was best for the organization,” agent Leon Rose said. “Ultimately, he did right by Carmelo and made a deal. It all worked out for everybody.”

Anthony expanded his wish list beyond the Rockets once it became clear no deal would be made.