Austin Rivers Feels This Season Is His Last Shot 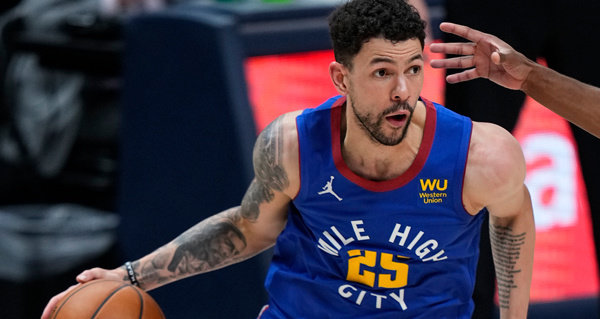 Austin Rivers feels fortunate to have a roster spot in the NBA with the Denver Nuggets, and he's not taking it for granted. Rivers recently said, "I'm not any more comfortable now than I was a year ago. I'm still treating this like this is my last shot."

Rivers signed with the Nuggets late in the 2020-21 season. He was added as an injury replacement for Jamal Murray. Rivers' signing in Denver came after nearly a month without a roster spot following his release by the Oklahoma City Thunder. Oklahoma City had acquired Rivers from the New York Knicks in a three-team trade that included the Philadelphia 76ers.

In 15 regular season games (five starts), Rivers averaged 8.7 points for the Nuggets on 37.5% shooting on three-pointers. In the playoffs, Rivers started nine of Denver's 10 games and averaged 9.2 points on 41.3% shooting from behind the arc.

Rivers is expected to be a part of the Nuggets rotation again this season, as Murray continues to rehab from a torn ACL. Fellow guard Will Barton is also dealing with an ankle injury, which has opened up more time for Rivers.