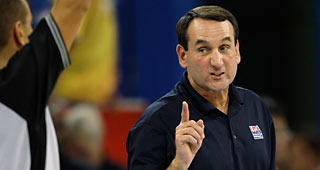 When Kyrie Irving started to heat up halfway through the first quarter, he removed any intrigue from the championship game of the World Cup. Team USA was up 35-21 after ten minutes and never looked back from there, which was really the story of the tournament. The Americans dominated with absolute ease, going 9-0 and winning by an average of 33 points a game, their highest margin of victory since the 1994 world championships.

They trailed only once at halftime - a group play game against Turkey which they ended up winning by 19 points - and they were never tested in the second half of a game. None of the teams they faced could stop them from scoring and none could consistently execute against their defense. Order has been restored to the basketball universe, as Team USA has won the last four major international tournaments and hasn’t lost a game since 2006.

The scariest part about their performance is that this wasn’t even the team Mike Krzyzewski and Jerry Colangelo envisioned sending to Spain. At the start of the summer, the three players expected to lead Team USA were Kevin Durant, Kevin Love and Paul George. Coach K was able to reshuffle the roster on the fly, with waves of shooters and defenders on the perimeter and three man rotation upfront of Anthony Davis, Kenneth Faried and DeMarcus Cousins.

Without Durant, Team USA opted to spread responsibility around and not run their offense through any one player. Six different guys - James Harden, Klay Thompson, Steph Curry, Irving, Davis and Faried - averaged in double figures in the tournament. The days of international teams wanting to zone the Americans and daring them to shoot from the perimeter have come and gone - Team USA shot 52% from the field, 57% from 2 and 40% from 3.

While there were moments where the offense stagnated and individual players held the ball, for the most part, the Americans did a good job of spreading the floor, moving the ball around the perimeter and finding the open man. With Cousins coming off the bench and dominating second unit big men, averaging 9.6 points a game on 70% shooting, they even had the option of running offense through the post when the pace of the game slowed down.

That didn’t happen too often, though, as the US had only one game where they scored less than 95 points. When you consider that international games are only 40 minutes long, it shows you how effortlessly Team USA was able to put up points against the best teams in the world. At a certain point in each game, they started going from defense to offense and getting out in the open floor, essentially running every team they faced out of the gym.

Defense was their calling card in this tournament, an impressive feat when you consider the NBA reputations of many of their best players. Four of their five starters - Irving, Curry, Harden and Faried - are guys viewed as weaker players on that end of the floor. Fewer minutes and smaller offensive roles allowed them to increase their effort level while a great defensive scheme by Team USA’s coaching staff put them in a position to succeed.

Given their overwhelming edge in talent and athleticism, you would expect the Americans to be a dominant defensively, but that hasn’t always been the case. Even when the US was finishing out of the top two in major international tournaments from 2002-2006, the problem was never a lack of athletic talent. Under the direction of Colangelo and Coach K, the American players buy into a team concept and execute at a high level on both sides of the ball.

In 2014, the end result was a juggernaut that ran rings around the rest of the world. If you break down the roster individually, no one would take this version of Team USA over either of the teams that won gold medals in the last two Olympics, yet both groups had to pull out several games in the fourth quarter. A lot of that is because Spain won silver in 2008 and 2012 and lost in the quarterfinals in 2014, but you can only face the teams in front of you.

When Spain was knocked out of the tournament, they took almost any chance of drama with them. Before their upset loss to France, the Spaniards were playing about as well as Team USA, going 6-0 and winning by an average of over 20 points a game. On paper, the Spanish frontline of the Gasol brothers and Serge Ibaka could have given the Americans some match-up problems upfront, but the way they lost to France throws cold water on that scenario.

If Spain was going to be physically manhandled in their own gym and outrebounded 50-28 by a frontline of Boris Diaw, Joffrey Lauvergne and Boris Diaw, they were going to have a hard time keeping Davis, Cousins and Faried off the glass. The French didn’t even play that well in the upset - they shot 39% from the field and 25% from 3. If the US had used a similar defensive game-plan and shot well from the perimeter, they would have blown Spain out.

With their gold medal in the World Cup, the US automatically clinches a spot in the 2016 Olympics, which means they won’t have to play any qualifying games in 2015. That’s good news for international basketball, since Team USA’s presence tends to remove most of the drama from the proceedings, the ultimate tribute to how dominant they’ve been under Coach K. They are winning so easily these days the whole thing is becoming kind of boring.