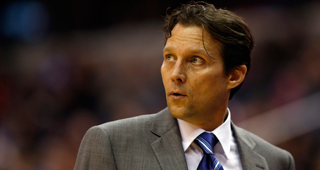 Chris Johnson signed a 10-day contract with the Utah Jazz out of the D-League and here is a scouting report on his game:

Situation: Utah recently had D-League prospects Elijah Millsap and Elliot Williams around for 20 days, but opted to keep Millsap and let Williams go. The Jazz decided to add another wing in Johnson to replace the roster spot left by Williams. Johnson, a 24-year-old from Dayton, has seen NBA action over the past three seasons, spending eight games with Memphis two years ago, 40 games with Boston last year, and nine games with Philadelphia this season. He’s played well with the Rio Grande Valley Vipers this season and will try to make another good first impression in Utah.

Size/Athleticism: Johnson has a wiry frame with long arms and a long stride. He’s a bouncy athlete and moves well laterally.

Ballhandling: Johnson can put the ball on the floor for one or two dribbles and get to the rim. He isn’t going to wow with his ballhandling, but can beat defenders off the bounce.

Shooting: During his NBA career, Johnson is shooting just 32.1% from three-point range, but his D-League numbers are slightly better. For Rio Grande Valley, Johnson is averaging 2.4 three-point makes per game from while shooting 35.4% from deep. He’s especially effective in the corners, shooting 16-of-40 (40%) on corner threes. Improving his jumper could help the southpaw become a rotational player.

Penetration: Johnson is a scrappy offensive player that can slash to the rim off ball fakes or sloppy close outs. He’s shooting 64.0% from inside of 8 feet this season and 60.6% of his field-goal makes come from inside this distance.

Passing: Johnson moves the ball well, averaging 2.1 assists per game. He isn’t much of a creator, but makes the extra pass when necessary.

Defense: This is the standout trait in Johnson’s game. He plays with great energy on the defensive end of the floor and defends the wing exceptionally, contributing 1.7 steals and a block per game. Johnson has the length and athleticism that translates to the NBA level and has been praised for his defensive ability in every NBA stint, so it’s safe to assume Johnson will continue to excel in this area.

Rebounding: Johnson’s energy and athleticism also translates to the rebounding department, as he averages 5.9 boards per game. He adds 1.7 rebounds on the offensive glass and can putback misses due to his motor.

Versatility: Johnson can play either spot on the wing. He’ll be limited offensively, but can defend the shooting guard or small forward spots successfully.

Final Analysis: Johnson is a classic glue guy with 57 games of NBA experience. His upside is as a “3-and-D” corner specialist, but can still improve offensively. While he’s still raw, Johnson is averaging an impressive 20.1 points per game in the D-League to compliment his stellar defensive play. He’s a productive defensive specialist that isn’t afraid to do the dirty work and should see some minutes immediately in Utah.