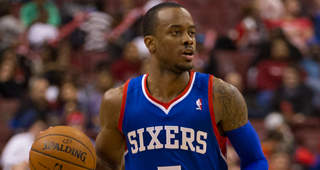 Lorenzo Brown signed a 10-day contract with the Minnesota Timberwolves out of the D-League and here is a scouting report on his game:

Situation: With Miroslav Raduljica’s second 10-day contract expired, Minnesota didn’t want to sign him for the rest of the season and filled the newly opened spot with Brown. The Timberwolves actually drafted Brown with the 52nd overall pick in 2013, but he didn’t make the roster and spent 26 games with Philadelphia last year. Brown recently impressed at the D-League Showcase in Santa Cruz, where he averaged 18.7 points, 6.7 rebounds, and 5.3 assists in three games while shooting 53.5% from the floor and 4-of-7 from deep. The Timberwolves need some depth at the point guard position, as Ricky Rubio has been out since November with an ankle injury and Zach LaVine has shown some struggles behind Mo Williams. After leaving N.C. State as a junior, the 24-year-old Brown is ready for another NBA opportunity.

Size/Athleticism: Brown possesses great physical tools for the NBA, standing 6-foot-5 with a long wingspan. He’s an elite athlete and has the build for a legitimate NBA point guard.

Ballhandling: Brown is a solid ballhandler that doesn’t get rattled by pressure. He isn’t going to create his own shot very often, but can set up others.

Shooting: This is an area Brown will need to improve on considering he shot just 3-of-30 from three-point range in his last NBA stint. He has shown major improvement in Grand Rapids; however, as Brown is shooting 38.2% from deep and was 6-of-10 from behind the arc in his last three D-League games. He hasn’t displayed a great mid-range game, shooting 18-of-54 (33.3%) from 8-24 feet, but has shot it well from beyond the arc this season. Will it translate to Minnesota?

Penetration: Brown can use his quickness and athleticism to beat defenders and get to the rim. He’s shooting 61.2% from inside of 8 feet and can bring some excitement with highlight dunks. Brown only gets to the free throw line for 3.3 attempts per game, but can occasionally attack the hoop.

Passing: This has been a big improvement in Brown’s game, although his lackluster 3.9 assists to 3.6 turnovers per game may not stand out. He has great court vision, especially in the open floor. His turnovers can be over ambitious, but Brown is an underrated passer that should play well with NBA athletes like Andrew Wiggins around him.

Defense: Brown uses his quickness, athleticism, and length to his advantage on the defensive end. He’s a pesky on-ball defender and can force opponents to change directions. Brown’s also averaging 1.9 steals per game, ranking fifth among current D-League prospects.

Rebounding: Brown is one of the best rebounding guards in the D-League, averaging 5.2 rebounds per game. As a guard that excels in the open court, Brown isn’t afraid to grab a rebound and push the tempo.

Versatility: Because of his size and athleticism, Brown can play either spot in the backcourt effectively. His upside will obviously be at the point guard position, but he can play and defend the shooting guard spot as well.

Final Analysis: Brown was due for a Call-Up after his impressive play at the D-League Showcase, where he earned First-Team honors. He might have the highest ceiling among D-League point guards, but will need to prove he can shoot it from three better this time around. Brown impacts the game in multiple areas, so even when his jumper isn’t falling he can provide productive minutes. If he impresses with a couple 10-day deals, don’t be surprised to see Minnesota take a chance on Brown for the rest of the season.