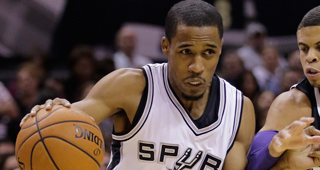 Bryce Cotton signed a 10-day contract with the Utah Jazz out of the D-League and here is a scouting report on his game:

Situation: Cotton was one of the top collegiate point guards in the country last year, averaging 21.8 points and 5.8 assists per game as a senior, but ultimately went undrafted and signed with the San Antonio Spurs. He was cut after playing in the Las Vegas Summer League with the Spurs, but landed with San Antonio’s D-League affiliate, the Austin Spurs. Cotton has emerged as one of the most productive players in the league, averaging 22.4 points, 4.7 rebounds, and 4.6 assists per game, and had an impressive 40-point showing at the D-League Showcase earlier this year. He recently topped that total with 43 points, nine assists, and eight rebounds against the Reno Bighorns. Utah already has young, talented point guards in Dante Exum and Trey Burke, but Cotton could see action next to the 6-foot-6 Exum. As just a 22-year-old, Cotton will be another talented floor general in Utah.

Size/Athleticism: This was the biggest knock on Cotton during the draft process. At just 6-foot, 163 pounds, Cotton lacks ideal size and athleticism for the NBA. He’s a decent athlete vertically with average quickness, but his physical tools aren’t up to the NBA standard.

Ballhandling: Cotton is a quality ballhandler that can change speeds. He attacks with either hand and has an effective crossover to keep opponents off balance.

Shooting: After shooting 36.7% from three-point range as a senior, Cotton has improved on that percentage in Austin. In the D-League, Cotton is shooting 44.8% from behind the arc and averaging 2.6 makes per game. He can hit the three consistently or pull-up from mid-range. Cotton is also shooting an impressive 90% from the free throw line.

Penetration: Cotton can attack out of the pick-and-roll, but has to use some tricks against bigger defenders. He shows a good feel for the floater but won’t make a living inside of the paint. Cotton is shooting 54.1% from within 8 feet, ranking within the D-League average.

Passing: Cotton has a good feel for the game and has no issues getting teammates involved. His assist numbers have taken a slight dip since Kyle Anderson has been on assignment, but Cotton is still averaging 4.6 assists per game. While he can score, Cotton shouldn’t be seen as a score-first point guard, as he can run the offense effectively.

Defense: Although Cotton lacks ideal length, strength, and lateral quickness on the defensive end, he’s been an excellent defender in the D-League. His hustle and energy can frustrate opposing ballhandlers and lead to 1.3 steals per game. It will be interesting to see how Cotton’s defense translates to the next level.

Rebounding: Cotton is tough on the glass, averaging 4.7 rebounds per game in Austin. He won’t leap over NBA big men for rebounds, but he can go inside and time his jumps accurately to pull down an occasional board.

Versatility: Cotton has spent some time off the ball at Providence and in the D-League, but his size will likely limit him to the point guard position. If he spends time with Exum in the backcourt, there’s a chance he can play shooting guard offensively and defend opposing point guards. Exum’s size allows for some creativity, but Cotton is certainly a point guard prospect going forward.

Final Analysis: While there are questions about his size and athleticism, Cotton has simply been too productive to leave in the D-League. He’s the D-League’s third leading scorer and has emerged as a top-five three-point shooter. Cotton has proven at all levels that he’s capable of competing against top competition and will certainly enter the NBA with a chip on his shoulder. After being under-recruited and undrafted, Cotton is the type of player that may surprise people.