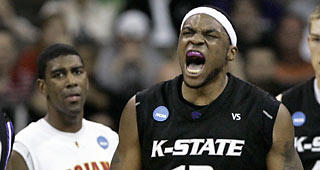 Henry Walker signed a 10-day contract with the Miami Heat out of the D-League and here is a scouting report on his game:

Situation: Formerly known as Bill Walker, the Kansas State product enters a new-look Miami organization. Pat Riley acquired Goran Dragic at the trade deadline to boost the backcourt, but the frontcourt took a hit when it was announced that Chris Bosh would miss time with a blood clot in his lung. With two roster spots open after the deadline, Walker was brought up out of the minor league affiliate Sioux Falls, joining former teammate Tyler Johnson on the NBA squad. Walker was a second round pick in 2008 and spent time with the Boston Celtics and New York Knicks during four NBA seasons. He’s spent the past two seasons playing in the D-League, Venezuela, and Philippines. The 27-year-old should see minutes off the bench immediately.

Size/Athleticism: The 6-foot-6, 220-pound small forward has a strong frame with good athleticism. Walker moves well and has underrated quickness for his bigger size.

Ballhandling: Walker doesn’t have a great handle, but does have the ability to attack the rim off the bounce. While he may not be a primary ballhandler, he can take the ball up the floor.

Shooting: Walker is a good catch-and-shoot threat. He’s averaging 3.1 made three-pointers per game while shooting 44.8% from deep. His best spot is at the top of the key, where he’s connected on 20-of-33 attempts (60.6%) this season.

Penetration: Walker can use jab steps or ball fakes out of the triple threat position and get to the rim. He uses his size and bulk to finish with contact.

Passing: Averaging 1.5 assists per game compared to just 0.9 turnovers, Walker is a decent passer that limits mistakes. He won’t be much of a playmaker, but won’t hurt a team in this area.

Defense: When dialed in, Walker is a solid defender that uses his size and length to stay in front. He can sometimes get out of his stance off the ball and get in trouble, but knows where to be as a help defender. Walker lacks elite lateral quickness but should be a decent wing defender in the NBA.

Rebounding: Walker is averaging 3.9 rebounds per game in Sioux Falls. He isn’t a standout in this area, but can sneak inside and pull one off the glass.

Versatility: Walker’s versatility should help Miami in the immediate future. He can play the shooting guard or small forward position, as he appears bigger than his 6-foot-6 frame suggests. There’s even a chance Walker can slide into the stretch four spot with the recent loss of Bosh. He has a chance to play three positions depending on who’s healthy or available.

Final Analysis: After playing 157 NBA games, Walker returns to the big stage for the first time since 2012. He’s showcased his ability to shoot it from deep in Sioux Falls and should add some depth for Miami. Walker should be penciled in as a small forward, but could be moved around to create bigger or smaller lineups.