The Pat Riley Empire Strikes Back 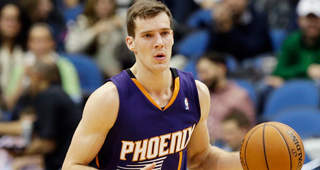 Eight months ago, with LeBron James headed back to the Cleveland Cavaliers and Chris Bosh contemplating playing for the Houston Rockets, it looked like the grand experiment in South Beach had come to an end. With two of the Big Three gone, would a hobbled Dwyane Wade want to stick around for a massive rebuilding project or would the Heat have been better off moving their franchise player and starting over? It would be hard for any franchise to recover from losing the best player in the NBA in the prime of his career, particularly one that didn’t have a lot of its future first-round picks.

Instead, with their backs against the wall, Pat Riley and Erik Spoelstra convinced Bosh to stay, Wade to re-up and Luol Deng to come aboard. From there, they benefitted from the unlikely emergence of Hassan Whiteside, creating a core of four two-way players at SG, SF, PF and C. Just like that, Miami was only one more piece away from being an elite team again. Mario Chalmers had proven himself, but the Heat needed more of an offensive punch at the position since LeBron’s departure meant they no longer had a de-facto PG holding the ball for most of the game.

Pretty much every team in the league would benefit from having Goran Dragic dropped in their lap for nothing more than future considerations, but few more so than Miami, who can plug him into a massive role as a secondary ball-handler and shot creator next to Wade. Dragic was looking for a bigger role in the offense and the Heat were looking for more offense from their PG - it was a match made in heaven that instantly puts Miami back on the NBA map.

Dragic works on two levels - he’s a high-level three-point shooter (career 36% on 2.9 3’s a game) who can space the floor for Wade and Bosh and he’s a high-level creator (16.2 points and 4.1 assists a game this season) who can command the offense when they are off the floor. In all likelihood, Spoelstra will alternate Wade and Dragic in the same way he used Wade and LeBron so that one of the two will be on the floor the entire game. It’s the same partnership that worked so well for Dragic and Eric Bledsoe in Phoenix last season before the arrival of Isaiah Thomas disrupted everyone’s chi.

The even better news is that the arrival of Dragic means the team will not have to lean so heavily on Wade, both this season and going forward. For as great a player as Wade still is, he’s no longer capable of holding up physically over an 82-game season and he needs a co-pilot that will allow him maintenance days and periods of rest to ensure he has fuel in the tank come playoff time. When Wade is out, Dragic can gun the ball to his heart’s content, dominating time of possession in a way he never could sharing floor time with Bledsoe and Thomas.

The combination of Bosh and Whiteside, meanwhile, is a perfect fit for Dragic’s skills, as Miami now has a prototype spread pick-and-roll alignment, with a rim-rolling 5, a stretch 4 and an elite 1. Spoelstra and Hornacek are reading from a similar playbook of spreading the floor, moving the ball and running pick-and-rolls, which minimizes the amount of decision-making their players have to do and allows them to thrive in max space.

The five-man unit of Dragic, Wade, Deng, Bosh and Whiteside fits almost perfectly together and they have an average age of only 29. They aren’t super young but they aren’t so old that Miami is thrust in a win-now situation. If need be, the Heat can afford to take it easy for the rest of the season and make sure that the older members of their core have recovered physically, which became even more important when news of Bosh’s struggles with a blood clot in his lungs broke late Thursday night.

Going forward, the only reliable contributors on their bench look like Mario Chalmers and Josh McRoberts, so they will need to fill in a few spots in the off-season and hope that Shabazz Napier and James Ennis can grow into bigger roles. Without LeBron, you would think Miami would need to take a more aggressive approach to upgrading the back end of their rotation than they did over the last four seasons.

The good news is that all their moves line up really well with what should be a massively expanded cap in 2016 when only Bosh and McRoberts are currently under contract. They will pay Dragic this offseason and Whiteside the next, but by that point Wade and Deng will see their contracts expire and they will be at the point in their careers when getting the most money possible is no longer the primary concern. One thing is for sure - there are few markets that scare the league more when they have cap space than Miami.

While it’s very unlikely that Riley can pull off anything similar to the coup in 2010 in 2016, he shouldn’t have too given the amount of talent already on hand. From there, what player wouldn’t want to live in South Beach, play for a franchise with a long history of winning and share the floor with a bunch of unselfish stars in a 4-out system that gets the best out of everyone’s game? There’s a reason Dragic asked for Miami, New York and Los Angeles in his trade demands with Phoenix and there’s an even bigger reason why he ended up with the Heat.

Those are the three glamour markets in the league - the difference is that the Knicks and the Lakers have been into the ground in recent years while the Heat are coming off four straight trips to the NBA Finals. Pat Riley has won in Los Angeles, he has won in New York and he has won in Miami. He knows how to sell the bright lights and the big city and he has a long history of bringing success wherever he goes. Back in 2010, the story was that Riley dumped all his championship rings on the table in front of LeBron and told him he know how to get more.

Riley has been in the NBA for over 40 years and he plays the game at a whole different level than most front offices. He knows the league is about stars and he knows that stars want to play in cities like Miami, which is why you haven’t seen him try to run the show in a place like Utah or Indiana. His hubris might end up backfiring on him in the form of the unprotected first round pick in 2021 he had to give up to acquire Dragic but that’s so far into the future that it might as well not even exist at this point.

For now, Riley has his man and the Heat are going to be a serious threat in the Eastern Conference for the indefinite future. The Empire just struck back.