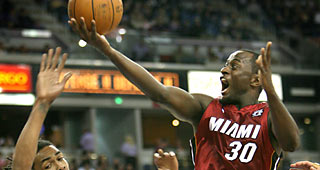 Earl Barron signed a 10-day contract with the Phoenix Suns out of the D-League and here is a scouting report on his game:

Situation: While Phoenix made headlines for trading Goran Dragic and Isaiah Thomas at the trade deadline, an overlooked aspect was the departure of center Miles Plumlee. With Plumlee gone and Alex Len the only true center on the roster, Phoenix added Barron for depth out of their D-League affiliated Bakersfield Jam organization. Barron, a 33-year-old with seven years of NBA experience, spent training camp with Phoenix this offseason and impressed at the D-League Showcase this season. He recently returned from China and played a game in Bakersfield before earning the Call-Up.

Size/Athleticism: Barron has a legit 6-foot-11, 230-pound frame that fits the NBA mold. He’s a bit slender and lacks major athleticism, but has good length to help compensate.

Ballhandling: As a 6-foot-11 center, Barron handles the ball well for his size. He can turn it over when trying to get over aggressive on drives, but is a solid ballhandler for a big man.

Shooting: Barron can step away from the basket and force a defender to contest his shot. He’s shooting 38.6% (34-of-88) from 16-24 feet and 32.9% from three-point range. Barron doesn’t have the most fluid release, but is consistent enough to force a defense to respect his jumper. This should help him in the pick-and-pop.

Interior Game: Barron uses his length to score inside. He doesn’t have a refined post game, as he’s shooting just 56.9% from inside of 8 feet, but can score over smaller defenders.

Passing: Barron can catch the ball away from the basket and survey the floor to find cutters. He’s averaging 1.4 assists per game in Bakersfield.

Defense: While his 6-foot-11 build is intriguing defensively, Barron averaged just 0.5 blocks per game in the Bakersfield. He isn’t a rim protector but shows some strength on the block.

Rebounding: Barron is averaging 10.9 rebounds per game in Bakersfield, ranking fourth in the D-League. He’s recorded 17 double-doubles in 27 D-League games this season. His rebounding ability will be needed when Len comes off the floor.

Versatility: Barron should be strictly considered a center, especially with the lack of true centers on Phoenix’s roster. His shooting ability could give some intrigue at power forward, but Barron’s size will give him a better matchup against centers.

Final Analysis: As one of the most productive players in the D-League this season, Barron was a double-double machine in Bakersfield. With the lack of centers in Phoenix, Barron’s experience will help him make an immediate impact. He’s an effective pick-and-pop center that can hit mid-range jumpers. If he can add rebounding and energy off the bench, Barron could find a role for the remainder of the season.