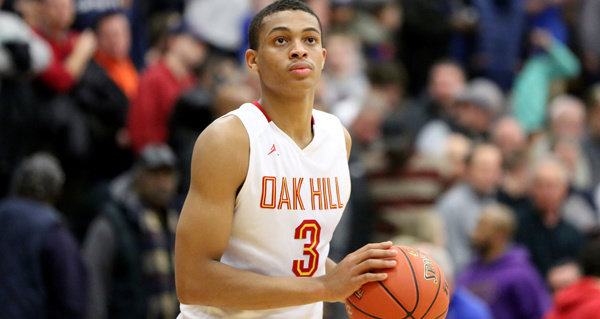 Listed at six-foot-six and 211 pounds [3], Johnson looks the part of a 3&D wing from a physical-standpoint and based on how he's been used, it seems this will be the role the 18-year-old [4] will be asked to fill in Lexington as well - given the depth of options the Wildcats have to handle in the perimeter and the more modern motion offense they appear to intend to install for this year.

Only nine of his 40 shots were three-point attempts but he regularly spot-up beyond the arc as a weak-side floor-spacer in the half-court and got most of his touches on the side of the floor – via Iverson cuts and running pick-and-rolls off dribble-handoffs to keep the offense moving.

Johnson averaged 22 points per 40 minutes on 52.5% shooting in the four games against the Bahamas National Team, San Lorenzo, Mega Bemax and a team built with a group of free agents from Toronto.

On the other end, Johnson showed to be a solid individual defender at this stage of his development and impressed with his ability to execute the scheme away from the ball. That said, athletes of his caliber are usually expected to be disrupting forces flying around to create events but that’s not what Johnson showed during this four-game set.

He took a couple of shots off jogging to the ball for dribble-handoffs and sprinting to the top around a pindown screen but looked best as an open shot shooter with his feet already set prior to the pass.

Johnson doesn’t yet have particularly impressive fluidity in his release but it’s not as if getting the ball out is a chore for him either. He rises up in perfect balance, gets good elevation and got a high arc on his shot frequently - launching comfortably over closeouts against the level of competition he faced last week.

As he shot well, Johnson demanded closeouts and opponents playing up on his catches off handoffs or Iverson cuts. The South Hill, Virginia native is very smooth putting the ball on the floor out of triple threat position but didn’t show an explosive first step or to be all that fast with the ball. Nonetheless, he manages to get dribble penetration by maintaining his balance and his momentum forward through contact thanks to the strength in his chiseled frame.

Johnson didn’t show to be an ambidextrous finisher just yet, struggling with his touch when forced to try laying it in with his off hand, but proved to be an explosive leaper off one foot in traffic off momentum, strong enough to finish on his way down and adept at using his length to over-extend for righty finger-roll layups.

He also flashed a running floater to finish over length from the in-between area.

Johnson didn’t exhibit consistent shiftiness or a tight handle when he didn’t take his man on a straight line drive but did show glimpses of very interesting resources here and there: crossing over his man into a pull-up, unleashing an in-and-out dribble pushing the ball up the court in transition, pivoting into a well-coordinated spin move and euro-stepping to maneuver his way through a crowded lane.

He showed to be a capable passer against a scrambling defense on drop-offs and making a pass over the top or a pocket pass in side pick-and-roll against a blitzing defense but nothing just yet in terms of particularly special court vision – recording only three assists in his 96 minutes in the Bahamas.

Johnson bends his knees to get down in a stance and puts in the effort in individual defense. He is unable to slide over picks at the point of attack cleanly and doesn’t use his strength to contain dribble penetration through contact regularly but can keep pace stride-for-stride on straight line drives and uses his length to try reaching around for strips.

Johnson also made an impact with his ability to stunt inside to clog driving lanes, closeout to the three-point line and stay balanced as he forced the opponent to put the ball on the floor.

His post defense was stout as well and he was active looking to pitch in on the glass – collecting 6.2 defensive rebounds per 40 minutes during the four games.

His most impressive work was probably as a help defender, though. Johnson showed to be attentive to his responsibilities executing the scheme – rotating in off the weak-side to crowd the area near the basket and scramming when the opponent tried to post up switches.

On the flipside, Johnson didn’t leverage his athleticism and his length to create a lot of events – other than defensive rebounds. He is an easy leaper off two feet to contest shots effectively at the rim and showed decent instincts looking to make plays on the ball but really only had two blocks and two steals in 96 minutes.

The NBA is starved for wings and Johnson absolutely looks the part of a 3&D type.

He’ll need to get three-pointers up at a higher pace than he did in the Bahamas to confirm that, as well as develop more fluidity in his release to take the sorts of shots on the move that Kentucky appears to want to get him.

Though he did get a few touches in isolation and on side pick-and-roll, the four-game tour wasn’t enough to see how much star potential Johnson has in terms of being able to create on the ball against a set defense.

He has the frame and the lateral mobility needed to perhaps become an ace individual defender against big wings down the line. For that, Johnson needs to start leveraging his strength to cut off dribble penetration more regularly. But for now his commitment trying to keep pace and contest shots is quite pleasing.

Away from the ball, his attention executing rotations and advanced strategies against mismatches at such a young age suggests Johnson is in line to become a potentially special team defender. If his frame continues to grow, maybe that intelligence could be leveraged by having him play a more central role for stretches – which could be a difference making nature.

[3] According to Kentucky’s official listing