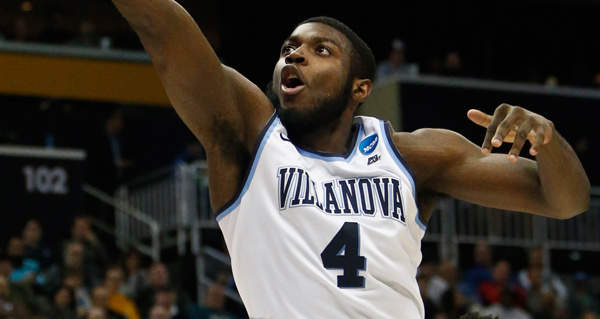 Eric Paschall was only the 210th ranked prospect in the 2014 high school class [1] but has managed to work his way into NBA consideration heading into his senior season, as ESPN’s Jonathan Givony has him ranked 20th in his latest mock draft.

After one season at Fordham, he transferred to Villanova, where he’s been a rotation player for the past couple of years and played a key role on the team that won the national championship last season, while averaging 14.2 points per 40 minutes [2] on 60% effective shooting and putting together a 17.2 PER in 38 appearances [3].

The soon-to-be 22-year-old [4] certainly looks the part for what the league is looking for in its combo forwards from physical and athletic standpoints, as he is listed at six-foot-eight and 255 pounds [5], while showing pleasing agility for someone with his frame.

He’s proven to be very useful on defense: capable of credibly defending players of different sizes – via switching onto smaller guys midway through the shot clock or cross-matching for entire possessions in terms of playing up a position. Paschall has also shown he can not only execute the scheme away from the ball but might even develop into a potentially impactful help defender down the line.

The corners regard the other end, where he’s been merely a capable open-shot shooter up until this point. The Dobbs Ferry, New York native hasn’t yet shown any dynamism as a shot creator and though he has flashed explosive leaping ability from time-to-time, Paschall was not deployed as a roller who can offer a vertical threat near the rim, so he figures to be a weak-side floor-spacer in the pros.

Matched up against wings, the Saint Thomas More Prep alum can bend his knees to get down in a stance defending on the ball, has several lateral slides in him to stay in front out in space, leverages the strength in his bulky frame to contain dribble penetration through contact and uses his length to try reaching around for strips every now and again.

Asked to pick up smaller players on switches more than a few times, he showed that while he is only so-so at staying in front of shiftier types who can shake him side-to-side and that he is too big to get skinny navigating over screens at the point of attack, Paschall is capable of directing these guys towards the sideline when isolated against them on the side of the floor and keeping pace with them on straight-line drives in order to effectively contest or intimidate their shots near the basket.

His most effective work in individual defense was bodying up true big man, though. He spent some time at center and proved himself to be tenacious enough to front the post while trying to deny easy entries and tough enough to hold his ground while playing stout post defense if the ball was eventually entered.

Paschall also did well as a big man in terms of team defense, as he flashed the ability to stop the ball in drop-back pick-and-roll defense and really impressed with his work as a help defender.

Paschall often made preventive rotations that took away easy paths to the rim and stepped up to the front of the basket to act as the last line of defense. He can go up strong off two feet to block a few shots here and there but only averaged 0.8 blocks per 40 minutes last season, making most of his impact as a defender near the goal as a willing charge drawer or as a big body who crowds the restricted area and makes it tough to finish around comfortably.

Paschall also proved to be consistently attentive to his box out responsibilities and was physical in his attempts to hinder the opposing big man’s ability to fight for the ball, though his average reactions to the ball coming off the rim led to him collecting just 12.7% of opponents’ misses when he was on the floor last season.

As a perimeter player, he proved he can be relied on to execute the scheme: rotating in to pick the roll man and helping the helper with physical boxouts. He doesn’t leverage his length to make plays on the ball, though – averaging just 1.2 steals per 40 minutes this past year.

Paschall isn’t particularly fast, so he doesn’t often run the shooter off his shot on long closeouts but has impressed with his ability to maintain his balance and stay in front when a hesitant shooter opts to put the ball on the floor.

Given his body composition, he is not suited to chase shooters around the floor but did put in the effort to sprint and slide around staggered screens when he did find himself matched up with such a player.

Paschall didn’t just stand in the corner but his primary role was to space out to the three-point line, while more capable players like Jalen Brunson, Mikal Bridges, Phil Booth and Donte DiVincenzo did work on the ball – logging only 16.8% usage rate last season.

He is still a fairly reluctant shooter, though. Most of his catches took place beyond the arc but only 37.4% of his attempts were three-point shots, due to the fact he is only a capable open-shot shooter at this point of development.

Paschall has nailed just 32.1% of his 312 three-point shots over his three years in college, at a pace of just 3.5 such attempts per 40 minutes in his two seasons at Villanova. Though his 77.9% free throw shooting over 262 foul shots offers hope that he does have the touch to become a more reliable shooter eventually, his release appears to need some work.

Paschall has an unorthodox base – with his knees closed in and his feet not pointed toward the rim. He catches on the hop and gets monster elevation, which leads to a high release, comfortably getting his shot off over closeouts, but his elbows don’t seem to be tucked in regularly.

As is, Paschall clearly felt more comfortable putting the ball on the floor more often than not. Thanks to the healthy spacing in Villanova’s offense, he was able to get to the basket on straight-line drives attacking closeouts and off dribble-handoffs.

He doesn’t have an explosive first step and isn’t very fast with the ball but can maintain his balance and his momentum forward through contact thanks to his strength, besides being able to mix in a well-coordinated spin move every now and again – taking 45.9% of his shots at the rim.

Paschall is not an explosive leaper off one foot in traffic often but has flashed some ability to hang in the air and finish through contact. He hasn’t shown much dexterity finishing with his left hand and has only showcased a basic finishing package up until his point but managed to convert his 124 shots at the rim at a 71.8% clip last season – with only 41.6% of his such makes assisted [6].

Paschall was sent to the post some, especially when opponents switched smaller players onto him. His best work operating with his back to the basket was spotting cutters darting down the lane or shooters relocating to an open spot around the wing. But he also showed to be a capable scorer via power moves, backing his way into short-range turnaround jumpers.

Other than that, Paschall proved to be a ball mover, consistently making the extra pass around the perimeter and off the bounce against a collapsing defense, besides running the eventual side pick-and-roll to keep the offense moving and sometimes finding the roll man over the top – assisting on 11.6% of Villanova’s scores when he was on the floor in 2017-2018.

When he found himself needing to create his own shot against a set defense, Paschall proved he can create enough separation to get a stop-and-pop jumper up in emergency situations late in the shot clock but isn’t someone you’d prefer having the ball in his hands often. He has a loose handle and though he showed glimpses of an in-and-out dribble, Paschall doesn’t have a whole lot of side-to-side shiftiness or advanced dribble moves to shake his man off balance.

[3] According to our stats’ database

[5] According to Villanova’s official listing