Kawhi Leonard Has Nothing To Prove 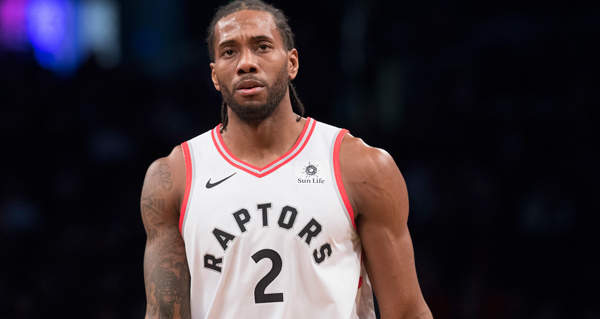 Near the beginning of Philip Roth’s Pulitzer Prize winning novel, American Pastoral, the book’s narrator, Nathan Zuckerman, goes to meet an old acquaintance named Seymour Levov. Part of his motive in meeting Levov is trying to figure out just who Levov is behind his unflappable public exterior. Zuckerman wonders, “What did he do for subjectivity? What was [his] subjectivity? There had to be a substratum, but its composition was unimaginable… What he has instead of a being, I thought, is blandness — the guy’s radiant with it. He has devised for himself an incognito, and the incognito has become him.”

Kawhi Leonard is efficiency of movement personified. There are no extraneous motions. Everything comes together so perfectly, but also so devoid of stylistic flair, that it can appear mechanical. Yet it is this very lack of overt personal style that makes Leonard so distinctive. He’s a cipher, a man whose inner self seems impenetrable, unable to be ascertained. Much of what we think we know about Leonard has been placed upon him by us, as fans and writers make assumptions in the desperate desire to figure out something, anything about one of the greatest basketball players alive. Nature abhors a vacuum, after all.

When the Raptors traded for Leonard last summer, they were taking a calculated risk. Knowing that his contract would expire following the season, they were hoping to sell him on their culture, on their ability to contend for a championship for years to come in the hopes of re-signing him. It’s a situation where Kawhi holds essentially all the power. Any team with the requisite cap space would be thrilled to sign him, even in light of his injury history. At his best, he combines elite individual scoring with some of the best perimeter defense of the last decade, showcasing a combined ability on both sides of the ball that few others in league history have been able to approximate. The Raptors know they want to retain Kawhi, yet it’s much less clear what Kawhi wants.

Despite being just 27, Kawhi has nothing to prove to the Raptors, or to anyone else. Already, he has been named First Team All-NBA twice, finished in the top three in MVP voting twice, and has also won Defensive Player of the Year twice as well. Perhaps more importantly, in light of a national discourse that prizes championships above all else, Kawhi is a proven winner, having already won a title with the San Antonio Spurs in 2014. On a team with Tim Duncan, Tony Parker, and Manu Ginobili, Leonard was arguably the Spurs’ best player that season and would go on to win Finals MVP as they easily dispatched the Heat in one of the most dominating Finals performances ever. Unlike Giannis Antetokounmpo, Damian Lillard, Russell Westbrook, James Harden, or a number of other All-NBA talents, Kawhi has reached the proverbial mountaintop, preemptively silencing the most vocal and insistent critique that can be volleyed at high level talent today — that they’re just not a winner.

While no one can doubt Kawhi’s resume, the Raptors still have much to answer for. Three years in a row, they have been eliminated by a LeBron James-led Cavaliers team, losing ten consecutive playoff games to them over three seasons. There’s no inherent shame in losing to a player as great as LeBron, but there is some shame in it happening over and over again while showing so little resistance, repeatedly appearing to wilt under the pressure. Look, if you’re the first seed and you’re getting unceremoniously swept in the second round, as happened to the Raptors last season, then something has gone awry. What the Raptors have to demonstrate this postseason, what Kyle Lowry and Pascal Siakam have to show not only to fans, but to their superstar teammate as well, is that things have categorically changed, that this year’s Raptors team, despite having several of the same principals, is a different beast than the one that we have seen collapse in the past. They need him more than he needs them.

With free agency speculation becoming a year round activity, sometimes a consensus arises even if no one can exactly pinpoint where it originated from. Sometimes it’s right, like when seemingly everyone assumed LeBron would be joining the Lakers last summer. Sometimes, it’s not, as when Paul George re-signed with the Thunder after most had assumed he was no more than a one year rental. We see similar assumptions this year. No one expects Kevin Durant to be back with Golden State next season and it’s also generally assumed that Kawhi is off to the Clippers next summer, yet apart from his being from Riverside, there’s really no concrete reason to believe this to be as inevitable as the rhetoric would have you believe. And yet if that is his inclination, the Clippers’ showing against the Warriors in the first round has to be convincing. It’s easy to imagine Leonard, or any high profile free agent really, watching this series and imagining how well they could slot in alongside veterans like Danilo Gallinari and Lou Williams while also helping mentor young players full of potential such as Shai Gilgeous-Alexander and Montrezl Harrell.

I have no clue where these rumors or assumptions are coming from, though I hear them incessantly. Kawhi is a player whose motives and desires are as opaque as anyone’s in the league. He does not reveal any bit of himself to the public. And I don’t think it’s a carefully calculated thing where he just reveals what he wants to, or intentionally hides elements of himself in order to construct a well-honed sense of mystery. He would prefer to opt out of the game altogether, but that’s the problem with choosing a public profession. After all, it’s not like the reclusiveness of J.D. Salinger or Thomas Pynchon prompted their readers to leave them alone; it only enhanced the aura surrounding them by adding a touch of mystery. When his infamous laugh went viral on media day, it wasn’t just that the laugh sounded odd that made its spread so inevitable — it was the fact that it was Kawhi letting his guard down for a brief moment, showing a trace of the humanity that fans know is there, but rarely get to actually witness.

Kawhi’s work obviously speaks for itself. He is a transcendent talent who raises the ceiling of a team that was already among the best in the Eastern Conference, but he remains an enigma. Already, at age 27, he has proven himself in almost every way imaginable. You may not be able to count the number of players who have combined brilliance on both sides of the ball as well as he has on one hand, but it wouldn’t take many more than that. Though it’s impossible for us, watching the games to figure out what makes Leonard tic, what makes him who the player and man he is, perhaps this offseason an executive will be able to do what we cannot and earn the services of who may still be the best two way player alive.

After Zuckerman’s dinner with Levov, he was no closer to figuring out exactly who the man he knew was apart from his public face and settled on the belief that he was “craving depths that don’t exist” and that he was “the embodiment of nothing.” Though immediately after saying this was what he thought, he writes “I was wrong. Never more mistaken about anyone in my life.” It would not surprise me if we are all collectively wrong about Kawhi Leonard as well, that there are untold depths to him lying behind his athletic brilliance. However, I would be even more surprised if we ever found out what they are.