An Even More Dominant LeBron 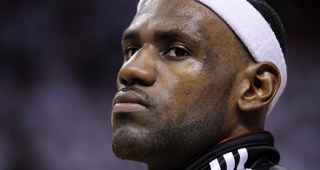 Thanks to the 24/7 news cycle and the ADD mentality it creates, regular season games don’t stay in the public consciousness very long. But the Miami Heat’s 97-93 win over the Chicago Bulls on Sunday, in particular LeBron James’ MVP-level performance, is worth remembering.

In 41 minutes against the NBA’s second rated defense, LeBron scored 35 points on 12-for-23 shooting while getting 11 rebounds and six assists. Yet, as impressive as those statistics are, they don’t really do justice to how dominant he was.

Miami raced out to an 18-7 lead, with LeBron scoring five of their first eight field goals at the rim. His first basket came when he grabbed a defensive rebound, threw it ahead to Dwyane Wade and raced past the entire Chicago roster to finish with a monstrous dunk. His second came when he got the ball near halfcourt before accelerating past a helpless Richard Hamilton for an easy lay-up.

The dunk that led SportsCenter came soon after, when he hurdled John Lucas III on a set halfcourt play for one of the greatest alley-oops in NBA history.

In a match-up of two equally skilled players, individual defense is primarily a function of being longer, stronger and faster than your opponent. There are a small handful of All-NBA caliber players with a skill-set comparable to LeBron; there isn’t a player in the world who can compare with him athletically.

The Bulls, with three of the best interior defenders in the NBA in Joakim Noah, Taj Gibson and Omer Asik and excellent perimeter athletes in Derrick Rose and Ronnie Brewer, became an elite team due to a defense unrivaled in terms of length and intensity. In the first quarter Sunday, LeBron made them look like the Toronto Raptors.

To stem the bleeding, Tom Thibodeau resorted to a 2-3 zone, abandoning his team’s calling card in an effort to keep LeBron out of the paint. Erik Spoelstra had an easy counter: shifting LeBron to the high post, where his height and court vision allowed him to pick apart the defense and find Joel Anthony at the rim.

However, LeBron’s athleticism and playmaking ability are known commodities.

What should concern the rest of the NBA was the post-game he displayed. His inability to play with his back to the basket has long been his most glaring weakness: Dallas exploited it in The Finals last season, putting increasingly smaller defenders, from the 6’7 Shawn Marion to the 6’5 DeShawn Stevenson and the 6’4 Jason Kidd, on him as the series progressed.

Against Chicago in the second half, he took turns abusing Hamilton and Brewer, facing them up and blowing by them from the elbow, baseline and the low-post. But with 5:00 minutes left in the fourth quarter, the Bulls had crawled back in the game, trailing Miami by only two points.

LeBron received the ball with a 26-year-old 6’7 225 wing with a 6’11 wingspan and a 40’ vertical defending him, and as he began posting up, no help came. So he patiently dribbled the ball five times, bull-dozing Brewer back feet at a time for an easy lay-up at the front of the rim.

To understand how well Chicago will have to play to defeat the Heat, compare the super-human acrobatics the 6’3 Rose uses to score in the lane against Miami with LeBron’s casual demolition of Brewer. The return of the 6’8 220 Luol Deng, the second rated small forward in the high school class of 2003, will help, but he’s not nearly enough.

While LeBron’s lack of a championship has made his game and character media punching bags, a perimeter player has never bested him in the playoffs. The common theme has been a dominant 6’11+ big man capable of controlling the paint defensively --  Tim Duncan in 2007, Kevin Garnett in 2008 and 2010, Dwight Howard in 2009 and Tyson Chandler in 2011.

As great as Rose is, he’s operating on the same plane of the game as LeBron. When Miami needed a stop in the 2011 Eastern Conference Finals, they stuck a 6’9 275 player fast enough to keep Rose in front of him without giving him space for his jumper, and that was that.

Dallas, in contrast, had a 7’0 low post scorer (Dirk) with a release point LeBron could not challenge and a 7’0 center (Chandler) capable of meeting him at the rim. The Mavericks, who treated Mike Bibby like a traffic cone all series long, were perfectly constructed to exploit Miami’s only two weaknesses, yet they barely won one of the tightest Finals in NBA history.

A year later, the Heat are much improved. They have the same starters, but instead of running out players like Bibby, James Jones, Erick Dampier, Zydrunas Ilgauskas, Jamaal Magloire, Juwon Howard and Carlos Arroyo in the regular season, the first four players off their bench are a healthy Udonis Haslem and Mike Miller, free agent acquisition Shane Battier and rookie Norris Cole. Cole, an athletic 6’2 175 guard, gives them someone to match up with players like JJ Barea, whose ability to blow by Miami’s point guards in the Finals made him an unlikely folk hero and an even unlikelier $20 million from Minnesota in the offseason.

More importantly, the only two teams in the league with better records, Chicago and the Oklahoma City Thunder, are similarly perimeter-oriented. Even the New York Knicks, who were able to sign Chandler in the off-season, effectively eliminating Dallas’ chance to repeat, have to depend on Carmelo Anthony outplaying LeBron over a seven-game series to threaten Miami. Trying to defeat a well-rounded Miami squad built around a prime LeBron James is going to be a Herculean task for any team built around a great perimeter player.

Instead, like the 2011 Mavericks, you’ve got to play a game governed by an entirely different set of rules. The Heat don’t have a big man capable of defending an elite 6’11+ low-post scorer; Anthony, their starting center, is only 6’9. They often close out games with two power forwards -- Chris Bosh and Haslem -- manning the interior.

That’s why the NBA’s great “known unknown” is the ultimate destination of Dwight Howard, the league’s best two-way center and the one man capable of standing in LeBron’s way.