The Choices of James Harden 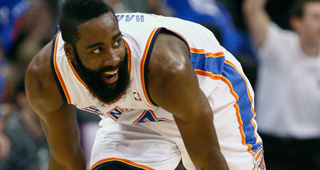 If the Oklahoma City Thunder can not agree to a contract extension with James Harden before Oct. 31, the 23-year-old shooting guard will become a restricted free agent next summer. After initially struggling with his role in an offense that already featured Kevin Durant and Russell Westbrook, Harden has blossomed into a bonafide star. The NBA’s reigning sixth man of the year, Harden averaged 19.7 points, 4.7 rebounds and 4.1 assists on 49% shooting per-36 minutes in 2012, even with a usage rating of only 21.7.

Eric Gordon, the only other young shooting guard in Harden’s class, signed a four-year $60 million max contract this summer, despite playing in only nine games last season after undergoing knee surgery. Harden would have no trouble finding interested suitors in 2013, including big-market playoff contenders like the Atlanta Hawks and the Dallas Mavericks. However, if Oklahoma City were to match a max contract offer, their payroll would skyrocket at the very same time punitive luxury tax penalties designed to punish such free spending came into place.

Over the next month, Harden and his advisors will have to grapple with one of the oldest dilemmas in free agency, between money and winning. In so doing, they should consider the career paths of Manu Ginobili and Joe Johnson, two of the best shooting guards of the previous generation who had to make a similar decision early in their NBA careers.

Ginobili, another 6’5+ left-handed shooting guard with a well-rounded game, is the player Harden most resembles on the court. Like Harden, he lucked into a great situation at the start of his career, playing with Tim Duncan and Tony Parker for one of the most well-run franchises in the NBA. Ginobili became an All-Star in his third season, but he was content to play a supporting role on three separate championship teams, agreeing to a series of below-market contract extensions while mainly coming off the bench.

Johnson entered the league as a raw 20-year-old out of Arkansas, emerging into his own with the Phoenix Suns in 2004. A massive 6’7, 240 guard with an excellent feel for the game, he was the fourth option on a team with three other All-Stars -- Steve Nash, Amare Stoudemire and Shawn Marion -- that won 62 games and made the Western Conference Finals. With Johnson hobbled due to an eye injury, the Suns lost to the Spurs 4-1, the beginning of a heated rivalry that would see the teams meet in the playoffs three more times in the next five years.

Johnson, however, would not be a part of it. That summer, he agreed to a blockbuster $70 million contract with the Hawks. The Suns, owned by legendary cheapskate Robert Sarver, had no intention of matching the offer, agreeing to a sign-and-trade with Atlanta that sent Boris Diaw and a few first-round picks back. Johnson went on to play in six straight All-Star games for the Hawks, but he hasn’t made it back to a Conference Finals series since.

There’s no way to know whether his presence would have guaranteed a championship with Phoenix, not when the Suns never had an answer for Duncan or Dirk Nowitzki, the two 7’0 who dominated the West for most of the last decade. However, it’s hard to imagine San Antonio racking up three titles if Ginobili had decided to look for greener pastures when his rookie contract was up.

At the same time, as great as he was for both the Spurs and the Argentinian national team, it’s hard to imagine Ginobili having more success than Johnson if he had played in Atlanta. For players viewed so differently in popular perception, it’s remarkable how similar their career statistics are -- 15/4/4 on 45% shooting for Ginobili, 18/4/4 on 44% shooting for Johnson. No shooting guard can single-handedly lift his team to title contention, as Kobe Bryant and Dwyane Wade found out in the middle of the last decade.

But when their careers are over, Ginobili’s late game heroics in the playoffs will be remembered long after Johnson’s machine-like consistency on good but not great Atlanta teams are forgotten. Neither player rates very high on Basketball Reference’s Hall of Fame probability scores, but Ginobili will likely be enshrined in Springfield while Johnson will not.

Which isn’t to say that Ginobili hasn’t paid a price for his decision to stay with the Spurs. In fact, it’s a mind-bogglingly high one: when Johnson’s latest contract runs out in 2016, he will have made approximately $200 million in his NBA career. Ginobili will have made $95 million when his contract expires at the end of this season, and at the age of 35, he doesn’t have any more big paydays coming up.

Ginobili will probably be financially comfortable for the rest of his life, but you never know, just ask Vince Young. Johnson, meanwhile, is in a far different financial class, what Chris Rock once called “the difference between being rich and being wealthy”. With hundreds of millions of dollars in the bank, he will have an innumerable amount of opportunities when his playing career is over to reinvest in his community and leave a legacy that goes far deeper than basketball.

Culture, more than even money, may have made the biggest difference in their decision-making processes. Johnson made the quintessentially American call: at the age of 24, he was eager to test the limits of his own game and prove that he could stand on his own. Ginobili, meanwhile, never left the proverbial nest, comfortable sharing the load with his friends, passing up individual accomplishments to pursue a greater communal goal.

From the outside, there’s no way to say who made the right or the wrong decision, not on a choice that personal. As Harden will soon find out, there are trade-offs to every decision we make in life.