Grading The Deal: Serge Ibaka Stays With Raptors For $65M Over Three Years 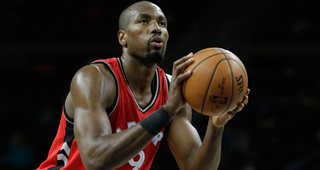 The Toronto Raptors were at a genuine inflection point this offseason deciding between shifting towards a broad reset of their roster, or continuing to move forward with the most successful core of franchise history and tinkering around the edges in the dependably wide open Eastern Conference. While there will surely be cap relief moves forthcoming, Masai Ujiri’s decision to re-sign Serge Ibaka on a three-year, $65 million deal signals they will continue on the course of being a top-4 team in the East.

Ibaka has all the tools to be the perfect complementary big man for the modern NBA with his floor spacing on offense and shotblocking on defense. While never an All-Star caliber talent, Ibaka was a precursor to the new wave of unicorn big men like Karl-Antony Towns, Kristaps Porzingis, Joel Embiid and Myles Turner with their shooting and shotblocking.

Perimeter shooting and shotblocking is a rare package for any big, so it is odd for it to come in the form of a player with such a limited instinctual feel for the game.

While Ibaka is a great spot-up shooter for a big man, the game speeds up for him when he needs to improvise and be more of a playmaker. Ibaka can’t put the ball on the floor and is also not a very adept passer.

On defense, Ibaka is more effective as a weakside shotblocker than one-on-one in the post. Ibaka even dropped in terms of his block rate down to 20th in the NBA this past season. Ibaka was emerging as a Defensive Player of the Year candidate in 2012 when he had a block rate of 9.8, but he’s nowhere near that player anymore. Instead of continuing to build upon his potential, he's fallen back to merely an average starter, albeit with that aforementioned perfect skill-set.

Ibaka’s real age is a constant, unknowable question that he unfortunately felt compelled to address in the hours leading to the signing, but the eye test is showing physical decline no matter how old he is.

Toronto will have to unload Jonas Valanciunas at some point to free up salary/tax issues as well as minutes for Ibaka at center. The Raptors’ offense and defense are better and make more sense with Ibaka instead of Valanciunas.

The Raptors could have offered a five-year deal to Ibaka, but the three-year commitment at slightly above average starter money is a prudent middle ground.

Ibaka was chosen by the Thunder in 2012 for a four-year, $48 million contract instead of James Harden, which made sense at the time in keeping their roster balanced, but became far obviously less so when Ibaka slipped physically and with his skill development while Harden became a perennial MVP. Ibaka became less critical for the Thunder with the emergence of Steven Adams at center, though we did see one final glimpse of what could have been in Games 3 and 4 of the Western Conference when Ibaka was playing a big role in how they were switching everything and were too physically imposing for the Warriors.

Ibaka’s tenure with the Orlando Magic clearly did not go well with their incoherent frontcourt and he was saved by his trade with full Bird rights to a contender that had coveted him for years. While Ibaka surely would have preferred more guaranteed years, he will have the opportunity to re-enter the open market at 30 and have at least half a chance at another similarly lengthed multi-year deal if his current production continues. Ibaka would have struggled to find a team willing to use this much valuable cap space in a saturated big man market.

Grade for Serge Ibaka: A