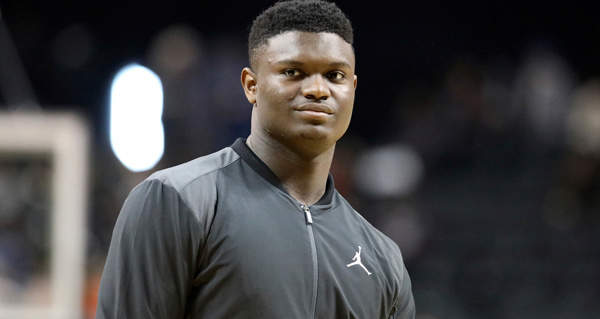 The 18-year-old [3] has a remarkable frame for someone his age, as Duke currently lists him at 285 pounds [4]. All that mass is reasonably well distributed within his six-foot-seven height and led to him consistently overwhelming competition at the high school and AAU levels.

Williamson looks like he could be dropped into an NBA game right now and fit in just fine from a physical-standpoint, though all that bulk at his young age does raise concerns over his conditioning for the near future.

On top of that general size, he is very nimble for someone his weight and an explosive leaper off two feet, without needing to load up to go up. Thanks to that ability to act as a constant threat above the basket on both ends and his strength, Williamson projects as a big man at higher levels.

However, the lefty had quite a few opportunities to handle the ball at Spartanburg Day and with SC Supreme, flashing some very intriguing potential as a shot creator from the perimeter – invoking comparisons to LeBron James on some corners of the internet.

Williamson is well-coordinated for someone with his body type and very few players in his age group were able to contain his bulldozer drives. But his skill level is still early in its development and the teenager hasn’t yet shown the flashes of geniality we’ve seen from James, so those comparisons appear to be misguided and unfortunate.

As is, his time at Duke should offer more clarity in terms of what can be reasonably expected of Williamson once he fits into a team that also has to worry about accommodating all the other high end talent around him. It will also illuminate his true level of commitment to defense.

He looked quite bored more often than not and rarely played with the sort of intensity you’d like to see from an athlete of his caliber.

With his combination of size and athleticism, Williamson has the potential to be a dominant defender, both on the ball and acting as a weak-side helper. But regular effort and attention to his responsibilities executing the scheme are also part of the equation, and in those areas he still has plenty of room to improve.

Williamson is an explosive leaper off two feet and looks his most impressive as a finisher. Spartanburg and SC Supreme didn't have him diving to the basket off pick-and-roll but he's proven he can play above the rim as a target for lobs while filling the lanes in transition and sneaking behind the defense on backdoor cuts.

He's also a constant threat on the offensive glass, having shown a very versatile rebounding profile:

But it’s his potential as a shot creator that has everyone fascinated. Williamson has a decent first step but isn't very fast with the ball. He is a wrecking ball driver who gets all the way to the basket by maintaining his balance and his momentum forward through contact thanks to his strength and body control.

However, though he was mostly a north-south driver for the most part, Williamson flashed some side-to-side quickness when he opted for trying to get by his man via shiftiness and dribble moves.

He also impresses with his flexibility going up off one foot in traffic, as he is able to adjust his body in the air for acrobatic finishes among the trees and uses his strength to finish through contact or on his way down.

That said, the bulk of his productivity as a slasher still comes via his ability to live at the foul line, as his large frame invites a lot of contact when he bulldozes his way through traffic.

On the other end, Williamson leveraged his athleticism into making an impact close to the basket when well positioned, not only blocking shots but intimidating attempts by high school kids half his size as well. Despite having only an eight-foot-seven standing reach, he can explode off the ground in a pinch and has potential to become a volume shot blocker, if his motor and recognition skills develop.

Williamson can also leverage that explosiveness into highlight chase-down blocks hustling back in transition defense from time-to-time.

He was given the chance the handle the ball in the perimeter against a set defense somewhat regularly - in middle high pick-and-roll and jogging around staggered screens for catches on the side of the floor.

Williamson hasn't yet developed a tight handle and is prone to having the ball stripped in traffic. He's also shown a strong preference for going left, even if it results in him driving into a crowd.

Besides a basic kickout when the open man is quite evident, he is not a particularly impressive passer off the dribble either at this point of his development.

But Williamson has flashed the glimpses of a very resourceful arsenal of dribble moves to get his shot off or get downhill in isolation or off pick-and-roll.

He can crossover into rejecting the pick, pullback behind it into a jumper, hang dribble into a stop-and-pop pull-up, in-and-out dribble to create separation for a side-step pull-up, go behind the back or between the legs in pinch, pivot into a well-coordinated spin move and pick up his dribble into high-stepping his way through traffic with his long strides.

Williamson can make a shot but is far from an efficient shot maker as of now.

So his effectiveness operating off the bounce also comes as a finisher. He has pretty good touch on non-dunk finishes, often relying on finger-roll layups but rarely attempting anything with his off hand. Williamson has also flashed a scoop finish and a running floater off 1-2 footwork from the in-between area when forced to deal with a rim protector parked in front of the basket.

He was sent into the post some but more often than not relied on his pure physical advantage on throw-ins over or through weaker opponents, yet to show much in terms of a patient approach or a set of moves working with his back to the basket - though he did flash a pivot move into a kickout to the opposite wing that showed he does have some court vision to potentially burn opponents that double him hard.

SC Supreme had him spacing out to the three-point line when he was off the ball and Williamson attempted a few catch-and-shoot three-pointers on spot-ups, with poor results. He rises with decent balance and has a compact release with a launch point out in front, getting the ball out reasonably fluidly and fairly quickly, but his elbows are all over the place and he rarely gets a good arc on his shot.

Spartanburg played a 3-2 zone and had Williamson at the top of it during the start of halves. He hunches rather than bends his knees, just barely getting down into a soft stance sometimes, and plays with very little intensity - offering zero ball pressure and rarely sliding laterally more than a couple of times to cut off dribble penetration when an opponent really tried to get into the arc off the dribble.

Then when the Griffins moved him to the backend during the latter parts of halves, Williamson didn't play with much of a motor looking to make the corrections needed as the last line of defense. He was rarely in a stance off the ball and rarely sought a body to boxout, completely relying on his athletic edge to make up for his lack of polish - which worked out fine at the levels he played at but will become more challenging as competition gets tougher.

SC Supreme had him defending as a weak-side defender and Williamson was equally unimpressive - rarely rotating in to pick the roll man, helping one pass away on dribble drives and putting up weak effort on closeouts.

He's shown to have only a couple of lateral slides in him in isolation defense as well, regularly offering no challenge for an opponent to get by him.

Williamson is a remarkable athlete who has shown glimpses of a very appealing skill-set as a shot creator from the perimeter. The question now becomes how exactly does he fit in a team that doesn’t exist with the sole purpose of giving him the ball and getting out of his way - which was the situation he enjoyed at Spartanburg Day and to a lesser extent with SC Supreme.

There is absolutely a role in the NBA for players who can defend closer to the basket on one end and take their man out to the perimeter on the other. There’s, in fact, a premium on such types right now. Williamson’s time at Duke will offer more clarity on how good he really is at doing these things.

Most of his star potential revolves around his development as a shot creator. To get there, he needs to improve his handle, his court vision and his pull-up jumper. But even if he doesn’t become that player, Williamson might still be a difference maker on offense by offering vertical spacing. He certainly profiles as the sort of athlete who could fill that role and be expected to be great at it.

With all of that said, the bigger uncertainties right now concern his fit on defense.

In theory, Williamson is someone who should offer tremendous versatility. He is strong enough to hold ground against taller players in the post or on the glass and can play above the rim as a shot blocking threat. He is also so nimble that one assumes he should be able to guard out in the perimeter – picking up smaller players on switches, flying around to create events as a weak-side defender or blitzing at the three-point line to play effective show pick-and-roll defense against pull-up shooters.

However, Williamson hasn’t often played with the sort of intensity that offers comfort to the assumption that he will fulfill all of this potential.

[4] According to Duke’s official listing