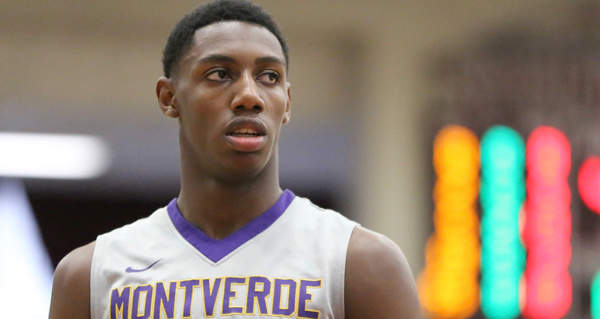 From a physical-standpoint, the 18-year-old [3] looks like someone who could log NBA minutes right now due to his chiseled six-foot-seven, 202-pound frame [4]. As a result of his advanced athletic development, he has already debuted for the Canadian National Team at the senior level in the latest World Cup Qualifiers window - in appearances against the Dominican Republican and the Virgin Islands.

In large part thanks to that overwhelming edge in athleticism in comparison to his age group, the swingman dominated in high school and led Montverde Academy to a "mythical" national championship in late March.

Barrett handled the ball in middle high pick-and-roll a lot less than when he’s had the chance to play with the Canadian National Team at the youth level but got plenty of opportunities to create against a set defense in isolation out of ball reversals and jogging to the ball for dribble-handoffs on the side of the floor. As a weak-side floor-spacer, his shot remains a mixed bag.

On the other end, Barrett acted mostly as a weak-side defender and used his length to fly around passing lanes from time-to-time. His position defense was solid as well and he put in the effort to execute the scheme. More interestingly, perhaps, Barrett picked up smaller players on switches every once in a while and showed he has room to become a capable defender at the point of attack.

The most intriguing aspect of Barrett's profile is his shot creation potential at his size.

The Mississauga, Ontario native is a huge wing for someone his age, which helps him play through contact and bully his way to the basket, despite the fact he played in less than ideal spacing.

The lefty doesn't have as much burst when forced to his off hand and hasn't shown particularly impressive side-to-side shiftiness but has a few resources when the opponent can offer resistance.

He can pivot into a well-coordinated spin move in a pinch and has developed a counter to that move as well, where he fakes the spin one way, pivots the other way and launches a step-back, fade-away jumper.

Barrett is an explosive leaper off one foot in traffic and off two feet with some space to set up his leap off a hop but has improved his ability to score on finesse finishes too. He can euro-step to weave his way through traffic, is flexible enough to adjust his body in the air among the trees and has great touch on finger-roll finishes with either hand, including off that spin move he likes to rely on.

Barrett can also launch running floaters over length from the in-between area.

When he had the chance to handle in middle high pick-and-roll, Barrett showed once again he is a good shot creator for others. He can play with pace and has a light hesitation move to get dribble penetration but despite the fact Montverde had capable shooters Filip Petrusev and Kevin Zhang as stretch-fours, there wasn't a lot of space for him to get downhill or turn the corner hard off the ball-screen, so Barrett was more often than not looking to pass handling around the pick.

Besides delivering basic drop-offs and kick-outs, he can pass over the top against hedges or hard shows and across the court to the opposite wing against the momentum of his body versus drop defense as well. His advantageous point of view helps him see the rotations in traffic. On the flip side, Barrett can get reckless with no-look pass attempts from time-to-time.

He can make a shot off the bounce if left completely unbothered but needs to continue working on his pull-up jumper in order to continue on his path to superstardom, as Barrett is still prone to launching some ugly-looking bricks here and there, especially when forced to his right.

He remains a capable, if not yet a consistently comfortable open shot shooter off the catch.

His jumper can look mighty fluid when he is able to catch on the hop off ball movement and rise up with confidence, particularly as the trailer in transition.

But for the most part, Barrett struggled with the touch in his shot when rushed through his mechanics and still goes through his motion somewhat mechanically. He gets little elevation off the ground and has a low release out in front.

Montverde had him take a three-pointer as the screener in the pick-and-pop in the game against NSU University School in the “mythical” national title game. But other than that, he acted as standstill spot-up shooter more often than that and appears to be a long way away from developing some versatility to his release.

Barrett bends his knees to get down in a stance, has multiple lateral slides in him to stay in front of similarly-sized players out in space and uses the strength in his 202-pound frame to chest up and to contain dribble penetration through contact when he is locked in.

He also did pleasing work putting in the effort to slide around screens chasing shooters off the ball, closing out in balance to stay in front when that shooter put the ball on the floor and helping double the post hard when asked to.

As a weak-side defender, Barrett proved he is attentive enough to execute the scheme for the most part, as he often stunted inside to clog driving lanes and stepped up to the front of the basket when he found himself as the last line of defense. He didn't leverage his explosive leaping ability to block a lot of shots but showed to be a willing charge drawer.

Montverde had him picking up smaller players on switches from time-to-time and Barrett showed he has potential to eventually develop into an asset defending the point of attack.

He is too big to navigate over picks but impressed with his lateral quickness by being able to go under the screen and meet the ball-handler on the other side in time to go back in front, at least against the level of athleticism he was playing against in high school. Barrett also showed some nice fire hustling in pursuit to challenge shots or passes from behind when his man got by him around the pick.

Barrett arrives at Duke viewed as a potential superstar.

Besides the advanced physical profile and athletic ability for someone his age, he has shown enough footwork and court vision to project as a volume shot creator for himself and others, though his shot is still a work in progress.

Big shot creators amount to the vast majority of the top players in the NBA right now and Barrett certainly looks in line to join the group, based on what he has accomplished by this point of his development.

On the other end, he has the size, length and quickness to be expected to become at least a capable individual defender against guys his own size and the effort has been there up until this point.

On the top of that, Barrett certainly looks like someone who might be strong enough to guard bigger players at some point soon as well, though it's unclear if he will have the toughness required for that. He has flirted with the potential of guarding smaller players and did well against the level of competition he played in high school but higher levels will demand more quickness and commitment and we will see if Barrett has what it takes when tested.

On the surface, he seems like a potential difference making defender who could unlock lineups on both ends of the extreme in terms of size. If you were designing on a lab a player capable of stealing minutes guarding point guards and centers, he would look exactly like Barrett. We’ll see to which extent that materializes.

[4] According to Duke’s official listing