What Will A Rajon Rondo Mentorship Mean For Lonzo Ball? 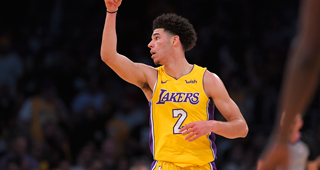 As far as analogies go, Rajon Rondo is, at best, a vinyl record player. You can think back fondly at a time when his skillset meshed well with the way NBA basketball was played. You can make him your point guard, and reminisce about a time when Garnetts and Pierces and Allens were still a thing. And if the vibe is just right, he still gets the job done.

At worst, he’s a cassette tape deck: a complete waste of money.

Let’s split the difference and just admit that he’s a vinyl record player, but he’s one that’s been in your parents’ closet since 1978, and you just dusted it off and put it in your living room instead of buying one of those sleek ones they sell at the front of Urban Outfitters.

The point being that “the next Rajon Rondo” is not something a young NBA player should aspire to be. A short point guard who can’t shoot, dribbles the ball relentlessly, and can’t really defend without resorting to dirty tricks that modern NBA referees have little patience for is neither the current formula for championship success nor the secret to upending it.

And yet when Rob Pelinka signed Rondo last July he claimed, “We brought in the right mentor” for Lonzo Ball.

For Rondo, this is great. It gives him a bare minimum of one role and a purpose he serves on a high profile team. But what will it mean for Ball?

The similarities between the two are clear: They both have tremendous court vision and an awesome ability to act on that vision with passes very few players have the precision and reaction time to make. Those are skills that will always have value in the NBA. Ironically enough though, they will rank second and third in players with that skillset on their own team. No player in the NBA currently has better vision and passing skills than LeBron James.

Being a teammate of LeBron James means finding out how you can best help LeBron James. Any other way of looking at it will result in less wins. The timeline by which you have to find that out is unknown, but the clock is always ticking.

Expendability is a shifting scale when you play with James. Even Dwyane Wade lasted half a season with Cleveland. What’s so scary for Ball about his potential mentor is that Rondo already is expendable. The Lakers are his sixth team in six years. If it works, it works. If not, he’ll start getting ready for the 2019 mutiny he’ll end up leading against whoever Orlando’s coach is at that point.

Ball is a talented young player whose career could go any number of ways. He could be today’s cornerstone and tomorrow’s trade bait.

Last season, Rondo shot a three-point percentage of 33 percent. Ball shot 31 percent. Ball is still young enough to improve his shot and at least has a willingness to take the shot that makes the defense react to him. But James needs shooters around him. Historically, any of James’ teammates who aren’t consistently making threes better be grabbing offensive rebounds if they want to stay on the court. Rondo’s aggressive but aimless attacks to the rim only to forcefully bounce pass it to the center are going to have less ideal results with JaVale McGee and Moe Wagner than they did with Anthony Davis.

Rondo isn’t the right point guard for James, and in any setting, he isn’t the right mentor for Ball. A great mentor for Ball’s career would be James, himself. He could teach Ball how to use his height to be a more effective defender, exactly how often to keep the defense honest with a shot, and how and where to set up pick-and-rolls with maximum spacing.

But as strange as it sounds, James doesn’t need another version of himself. He doesn’t want Ball mimicking his play on the court, because why would he want a 21-year-old doing a lesser impression of him when he can just do it himself? He always has and always will want players who complement him, players who can do a lot with a little.

The player Ball would be best served to evolve into is a more athletic version of late stage Jason Kidd, who was blessed with a basketball IQ that might have matched that of James. Kidd developed into a good spot up shooter who would have thrived next to James. Most importantly, he never needed the ball for long portions of the shot clock. He made the right decision immediately. When the ball was kicked out to Kidd, he had few abilities that any other wing player didn’t also have in that situation, the reason he was so effective is because, of the four or five options available, he always did exactly the right thing, and he did it without hesitation.

There’s no way of knowing whether those attributes can be taught, but one of the reasons Ball was such an interesting prospect coming out of UCLA is because he seemed to have a hint of that already in him.

Ball doesn’t need to be the next Rondo because the Lakers barely need the current Rondo. They have LeBron James. And they’ll likely be looking to experiment and build upon Brandon Ingram’s point-forward capabilities. Ball is in a tough spot because he doesn’t just need to keep developing, he has to find his own value. Otherwise, he’s just an asset.