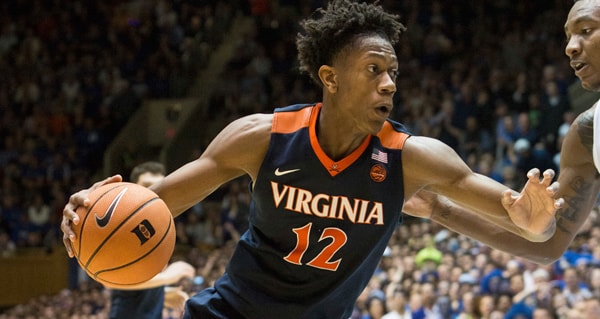 Though he logged just 657 total minutes, the 20-year-old [4] was a key cog on a Virginia team that finished second in the nation in adjusted efficiency margin [5] and won ACC Sixth Man of the Year honors.

Despite the fact he broke his wrist during the conference tournament and missed the team’s loss to Maryland-Baltimore County in the NCAA Tournament, draftniks were enthused with the idea of him entering this year’s class but Hunter opted to return for his sophomore season without even testing the waters.

The Philadelphia native looks the part of what the NBA is looking for in a two-way combo forward these days, which is why he is currently considered the ninth-ranked prospect in the 2019 draft class[6].

Listed at six-foot-seven with a chiseled 222-pound frame [7] and rumored to have a seven-foot-two wingspan, Hunter has enough size and has shown to be tough enough to hold his own against bulkier types in the post and the defensive glass.

He is also mobile and agile enough to defend true perimeter players out in space, aside from offering versatility in pick-and-roll coverage.

On the other end, the Friends Central School alum has operated as a hub to facilitate offense from the elbow area for the most part, as he’s played as a big on Virginia’s two-post system, but has also shown he can take his man one-on-one from the foul line down and that he has a projectable outside shot – even if he didn’t space out to the three-point line as much you’d like.

Hunter is tenacious in post defense – putting in the effort to front the post and prevent an easy feed. If the ball was still entered, he managed to hold his ground well enough and rarely got completely knocked back. Hunter hasn’t shown to be the sort of nuclear athlete who can block shots defending on the ball but is fairly effective walling off and contesting hooks.

He is attentive to his boxout responsibilities and isn’t averse to getting physical but didn’t show to be a particularly special leaper chasing the ball off the rim – collecting just 14.7% of opponents’ misses when he was on the floor last season.

Hunter signaled he can be relied on to execute the scheme – rotating in off the weak-side to help crowd the area near the basket consistently and stepping up to the front of the rim acting as the last line of defense proactively.

He is a very willing charge drawer and can go up off two feet to challenge shots via verticality from time-to-time but doesn’t act as a volume shot blocking threat – averaging just 0.8 blocks per 40 minutes as a redshirt freshman.

And though he averaged just 1.2 steals per 40 minutes, Hunter was effective at using his length to bat pocket passes and passes over the top when he rotated to pick up the roll man.

He bends his knees to get down in a stance, has as many lateral slides as needed in him to stay in front of similarly sized players out in space, uses his core strength to contain dribble penetration through contact and guards his arms up to discourage or challenge shots effectively.

Hunter is quick at covering ground on stunting-and-recovering and can contest catch-and-shoot jumpers effectively thanks to his length. He also impressed with his ability to closeout and run the shooter off his shot while staying balanced as that player puts the ball on the floor – though he was also prone to biting on shot fakes from time-to-time.

He can pick up smaller players on switches, as he is able to keep pace with quicker types on straight line drives and even showed glimpses of being able to stay in front of shiftier guys as they attempted to shake him side-to-side.

Hunter was also impressively effective containing the ball in drop coverage and blitzing at the three-point line then returning to his man to relieve the help in a timely manner on show-and-recover’s – suggesting he could be an asset against shooting big men in the pick-and-pop, which are notoriously hard to guard.

Despite not being the focal point of the offense and not having many plays run for him, Hunter logged 25.6% usage rate.

Most of his touches came around the elbow extended area, where he facilitated offense on handoffs and found backdoor cutters or isolated against his man on the side of the floor, as he hasn’t shown much of a post game just yet.

Hunter doesn’t have an explosive first step and hasn’t yet developed a set of dribble moves to shake his defender side-to-side but looks very smooth putting the ball on the floor off triple threat position, a shot fake or a jab-step.

He doesn’t have a tight handle but can pivot into a well coordinated spin move or euro-step to weave his way through a crowd, looks to protect the ball in traffic and has a frame that invites contact - taking a third or his shots at the basket[8] and averaging six free throws per 40 minutes.

Hunter can go up strong off two feet with some space to load up but hasn’t shown to be an explosive leaper off one foot in traffic.

As we are yet to see much flexibility to hang or adjust his body in the air, he’s been an up-and-down finisher up until this point, though a reasonably effective one. Hunter is adept at converting finger-roll and scoop finishes with either hand, uses his length fairly well to overextend while dealing with rim protectors and can finish on his way down – converting 60.6% of his 71 shots at the rim last season.

He also flashed a floater off a jump-stop to score over length from the in-between area.

Aside from facilitating the offense on handoffs, Hunter has shown flashes of enticing court vision – assisting on 11.8% of Virginia’s scores when he was on the floor. The team liked to place him in the middle of zones quite a bit. Aside from basic drop-offs and kick-outs off his short drives, he also showed glimpses of being able to run a side pick-and-roll to keep the offense moving and making a pass over the top.

When he was kept from driving, Hunter looked good on quick one-dribble side-step pull-ups and dribble-in pull-ups off an escape dribble against flyby closeouts, as well as no-dribble jumpers off sizing up his man or catch-and-shoot jumpers from the middle of the zone – nailing 46% of his 89 long-twos.

Hunter doesn’t look as good when forced to rise up off several dribbles, as he hasn’t yet developed a step-back pull-up and just generally struggles to create good enough separation for such looks.

As a floor-spacer, Hunter looks promising. He has an unorthodox shooting stance where he doesn’t point his feet towards the basket and hasn’t yet developed an all that quick release but rises up in balance off the catch, has fluid mechanics and fully extends himself for a high release.

With time to set his feet and work through his motion, Hunter can shoot over closeouts comfortably – nailing 38.1% of his 55 three-point shots, though at a pace of just 3.3 such attempts per 40 minutes.

His 75.5% foul shooting on 98 free throws offers quite a bit of hope that he could be about as efficient in the pros as well.

Hunter took a few shots out of jogging to a spot and a few pick-and-pop jumpers from mid-range but is more of an open shot shooter for the most part at this point of his development, as he struggled a little bit more when forced to rush through his release.

Hunter profiles as the sort of big wing/combo forward every team needs.

Though he hasn’t taken three-pointers in volume, Hunter projects as at least a capable floor-spacer and has shown he can aid the shot creation process via taking his man one-on-one with his side of the floor cleared or as a hub to facilitate from the elbows. He’s even started to develop some ability to take shots on the move.

Hunter figures to be an even more useful player on the other end. He’s strong and tough enough to hold his own against bulkier big men, while also being an option to defend similarly-sized players in the perimeter and offering flexibility to pick up smaller players on switches or blitzing pull-up threats at the three-point line.

With all of that said, the flashes of star potential aren’t there yet, as he hasn’t handled in middle high pick-and-roll against a set defense or leveraged his length and athletic ability to fly around creating events on defense. He hasn’t shown anything above what’s normal in terms of intelligence on defense and is also older than preferred for someone with his level of experience.

[3] According to our stats database

[7] According to Virginia’s official listing