The Importance Of Danny Green 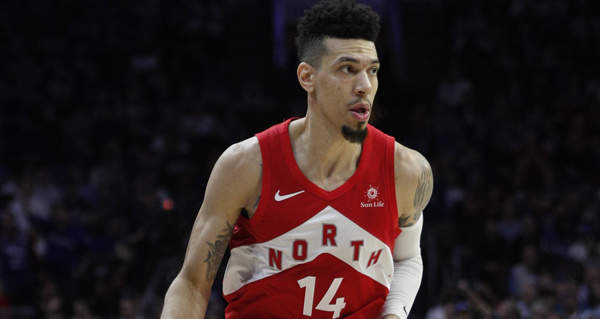 Not every player can be a star. Part of this is purely mathematical and logistical, but a larger part of it is based on something more mysterious and intangible. All NBA players are blessed, able to succeed at a sport played by millions in a way that the vast majority of those amateurs can only dream of. I always fantasized about making game-winners in the NBA rather than at Lions Park in suburban Akron or in my college gym, but I knew long before I was draft eligible that I was not one of the chosen ones, meant to succeed at any organized level. Yet even among those chosen seemingly by divine fiat, there are still tiers. There are the benchwarmers, the solid role players, the All-Stars, and the potential all timers, and in a way it’s kind of mind boggling how many gradations of ability there are even here — the highest strata of basketball ability in the world -- and ultimately, for many, the difference between a few years in the league and a decade boils down to no more than knowing your role.

For all of us, there’s something somewhat noble about finding your niche and embracing it with all your ability, something potentially fulfilling in completing even the most mundane of tasks. Simone Weil, in the conclusion of The Need for Roots, wrote “labour can be submitted to either in an attitude of revolt or in one of consent.” This applies to basketball players as well as to the manual laborers she was writing of, and the former stance is why Carmelo Anthony is out of a job, and the latter is why Danny Green is one of the best role players in the league and, as the Lakers’ third-best player, one of the most important players in the NBA entering the season.

Danny Green falls under that nebulous category of players who just seem like winners. At North Carolina, he won a National Championship in 2009 and has since gone on to win two NBA titles alongside Kawhi Leonard on both the Spurs and the Raptors. It’s not like Green is the primary reason for his team’s success — he’s not single-handedly going to transform a team on his own — but if you are a team trying to go from merely good to potentially great, Danny Green is a great player to have alongside you.

The Lakers currently have two of the top five or six players in the NBA, but their lack of depth is worrisome. Behind Anthony Davis and LeBron James, Green is likely the Lakers’ best player, which places him higher on a team’s hierarchy than ever before. While in San Antonio, Green was always secondary to a grouping of players including Tim Duncan, Manu Ginobili, Tony Parker, Kawhi Leonard, LaMarcus Aldridge, and Dejounte Murray, among others. And last season with Toronto, Green helped make the whole thing coalesce, but it’s hard to argue that he was a bigger part of the team’s success than Leonard, Pascal Siakam, or Kyle Lowry. Yet, looking at certain statistics, it looks like Green played a much more outsized role in his team’s success than a glance at the box score or the game tape may initially reveal. Last season, Green led all shooting guards in Real Plus-Minus, and was 13 overall, ahead of All-NBA talent like Kyrie Irving, Karl-Anthony Towns, Blake Griffin, and every single one of his Raptor teammates. In simple plus/minus, he was fifth in the league according to NBA.com, again attesting to the fact that teams are just better with him on the floor, as if his being on the floor imbues his teammates with some sort of mystical ability to convert their shots more easily than they would otherwise.

Offensively, Green functions primarily as a floor spacer. Last year, benefiting from the bevy of offensive threats on the Raptors, Green shot a career high forty-five percent from three and scored nearly three quarters of his points on such shots. That shooting percentage is likely to drop a bit next year, but his ability to score reliably from deep will be a boon for a team that finished next to last in three-point percentage last year. His mere presence on the perimeter will create space in the paint for Anthony Davis and LeBron James as defenders will be forced to respect his ability to knock down shots much more than they would have to account for Lonzo Ball, Brandon Ingram, Lance Stephenson, or Michael Beasley.

On the other side of the ball, he will help a Lakers defense that was actually better than you probably think it was last year, but still no more than mediocre. With LeBron likely to play more minutes at point guard than ever before, Green can slide over and help defend opposing guards, freeing James from having to exert himself as much on that end — something he has not shown much of an inclination to do in about half a decade anyway. Green is a versatile defender, combining length, athleticism, and intelligence to frustrate opponents and his size makes it easy for him to guard essentially any perimeter player.

Green himself is a bit of a cipher. Apart from posting an extremely ill-advised selfie he took at Berlin’s Holocaust Memorial five years ago, it is hard for me to think of anything that sets him apart as a personality. It is as if, in playing the role he has been assigned, he has subsumed any quirks or eccentricities out of fear that highlighting them would distract him or his team from the goal he has been tasked with, which makes his presence on the Lakers an interesting fit. With the team in frantic win-now mode, their roster has been a close approximation of the long imagined perpetual motion machine. Lakers fans are sure to hope that Green will prove to be a stabilizing influence but it’s hard to imagine any player, even one with his equanimity, being able to do that.

It’s difficult to call this the most significant season of Danny Green’s career. He’s already signed for the biggest payday of his career and has secured his place historically as a crucial member of two championship teams. However, he has never before been as important to a team as he will be this season. The Lakers will struggle at times to find scoring from players apart from Davis and James; they will often fail to have an offense that runs the way an NBA offense should; their defense will have numerous holes as they give big minutes to Rajon Rondo, LeBron James, and Kyle Kuzma. It is the job of role players to plug up those holes, to fill in the gaps and while Green is as capable of doing this as anyone in the league, it’s an open question whether he can shoulder that burden on his own. What is certain is that he will attempt to do so, with an attitude of consent.