Doncic & Porzingis Are The Mavs' Second Chance At A Transcendent Duo 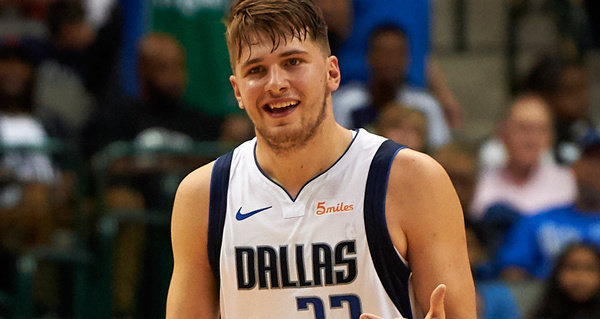 NBA discourse has always had a healthy appetite for “what if?” They used to be past tense conversations: What if Jason Kidd had played with Tim Duncan under Gregg Popovich?

What if Chris Paul were traded to the Lakers? What if the Pistons had drafted Carmelo Anthony?

In what we’re apparently calling the “player empowerment era”, those hypotheticals are spoken in the future tense in part because they have become increasingly realistic. They are 75 percent thought-exercise and 25 percent prediction. You know, What if Paul George and Kawhi Leonard played together? Or LeBron James and Anthony Davis? Or Kyrie Irving and Kevin Durant?

The flipside to the plausibility of these hypotheticals is their likely impermanence once they become reality. For one, the “empowerment” that we are assigning to these players requires them to have reached the point in their career where they command leverage in an open market, which at the very least requires they are past their rookie contracts. Mid-to-late career stars are making decisions based on immediate goals and quality of life (a totally reasonable way by which to operate). If and when those goals are realized or become less attainable they, by the same logic, might replicate the process elsewhere in a few years.

In both the NBA of Today and the NBA of Yesterday a relatively obvious maxim remains true: Pairing stars who complement each other and like each other at a young age is a good idea. Most people in America would move all over the country multiple times in their careers if they continued to be offered more money, better work environments, or a higher likelihood for success. But if offered those things early in our careers, we’d also probably prefer stability if we believed our current environments could keep offering them.

Luka Doncic and Kristaps Porzingis are on the Dallas Mavericks as a result of some combination of front office assertiveness and dumb luck. Now, the two European buddies are on the same team, and their uniquely versatile skill sets forecast to complement each other in a way neither has seen before. Porzingis is 24 years old. Doncic is 20.

It’s reminiscent of another famous “what if?” What if the Mavs had never broken up Dirk Nowitzki and Steve Nash. Both players’ careers turned out just fine, and Nowitzki even won a championship with the Mavs seven years later. But it’s not unfair to say that Mark Cuban likely robbed the NBA of over a decade’s worth of one of the NBA’s most potentially exciting duos of their era. The decision to break up Nowitzki and Nash was not made because the pairing was an imperfect fit, nor was it because the two players had grown tired of each other on or off the court. The decision was made based on the incorrect assumption that one of those players (Nash) had already reached his ceiling. This obviously proved to be catastrophically incorrect considering Nash literally won the next two MVPs.

Doncic has already proven to be a once-in-a-generation player. And in the current generation that he’s in, logic would advise Mavs fans not to expect 21 years of Nowitzki-like loyalty from him. He will become a star. He will be offered contracts. And he will play for whatever team makes him happy. And sure, the Mavs can’t control what Doncic chooses to do with his life down the road. That’s how America works. But they’ve already provided him with the thing that superstars tend to leave their franchises for: another superstar.

Imagine if Steve Nash and Dirk Nowitzki were never broken up. Now, imagine if Steve Nash were five inches taller and Dirk Nowitzki were three inches taller. That’s the kind of potential the Mavericks are looking at with their current duo. Doncic is already one of the league’s best passers, and Porzingis can spread the floor for him or run the pick-and-roll with him. They aren’t Joel Embiid and Ben Simmons, who are immensely talented but whose skill sets don’t mesh. They aren’t Kobe and Shaq, who were unstoppable but hated each other. They aren’t Durant and Westbrook, who were seemingly once close friends but whose style of play amounted to taking turns doing something with the ball. It really might be accurate to say that the duo Doncic and Porzingis most resemble is the one that we never got to see enter their primes together.

It’s unfair to the legacies of Nash and Nowitzki to suggest that two young players will have the kinds of careers that they had. But what Porzingis and Doncic can do is be a better and more noteworthy duo than the former Mavs, and they can do that by simply remaining a duo. As time goes on, that decision will be entirely up to them, partially because that’s the era we live and partially because you can be sure that Cuban won’t make the same mistake twice.