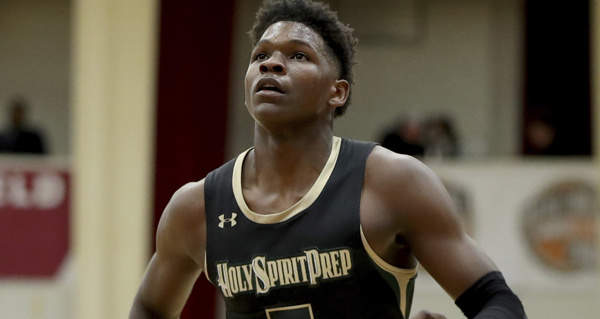 The league still seems to be putting a lot of value on guys who can make a pull-up three-pointer out of pick-and-roll and force opposing big men to venture far beyond the foul line – at the expense of shot creation for others and finishing ability at times. That demand is trickling down to the youth level and it must not be a coincidence that the top five players in this class, introduced below, each have reasonably versatile pull-up packages.

On the other end, on-ball defense remains something teams are willing to overlook, or at least not put much weight on, in their point-guards.

The stats and measurements in this post were researched at our own stats’ database, unless mentioned otherwise.

ESPN’s mock draft was used as the guide for the rankings cited.

Let’s dive into the introductions.

From a superstar-potential standpoint, Edwards will probably be the most appealing prospect in next year’s draft. Given his frame and style of play, he is likely to draw comparisons to Russell Westbrook and James Harden as a strong scoring guard who can be viewed as a lead ball-handler.

Edwards has shown the ability to be a very good isolation scorer with a smooth pull-up package – getting shots up off the dribble via step-backs, hang dribbles, jab steps and between-the-legs dribbles.

He looks comfortable operating in side pick-and-roll as well – either getting to his spots for mid-range pull-ups or making basic reads hitting the roll man over the top or with well-timed pocket passes.

Edwards is not a speedster with the ball, but he has shown some side-to-side quickness and relies on his strong frame to play through contact. Though he is shown explosive leaping ability off one foot in transition, Edwards most often looks to gallop into two-foot leaps in the half-court.

He should be quite capable of spacing the floor off the ball as well, having shown a fluid catch-and-shoot release with compact mechanics on spot-ups. Despite his low release, launching the ball from out in front, Edwards has flashed the ability to make contested jumpers with a defender closing out into his personal space.

Anthony was the second-ranked player in this year’s high school class after a stellar season at Oak Hill Academy.

Greg Anthony’s son offers pretty much all of his value as a scoring guard in isolation and out of middle high pick-and-roll, mixing in speed and explosiveness with well-polished dribble moves in his attempts to create space for pull-ups or paths to attack the basket.

Anthony has shown range from way past the NBA three-point line and can create separation one-on-one via side-steps, step-backs and fake spins. He can also hit step-in three-pointers against the on-ball defender going under the ball-screen in pick-and-roll and nail stop-and-pop pull-ups from the elbows.

Combining shiftiness with a tight handle, Anthony can get into the lane with crossovers, spin moves and in-and-out dribbles, when simply turning on the jets won’t do. He has flashed some explosiveness elevating off one foot in traffic and can hang or adjust his body in the air on double clutch finishes around rim protectors.

Anthony can make basic reads on drop-offs and kickouts to the strongside off drawing two to the ball but enters the collegiate level with a lot of people doubting his ability to create for others on a consistent basis.

Maledon is coming off his first full year as a pro, logging 1,070 minutes in France’s first division, the French Cup and the Eurocup for Tony Parker’s club, which won the Jeep Elite last season with the teenager acting as a caretaker point guard and floor-spacer off the bench – taking almost 44% of his live-ball attempts from three-point range and assisting on just 19.1% of ASVEL’s scores when he was in the game.

That said, among the players introduced in this post, he profiles as the closest to a floor general type, as the Frenchman has already developed a knack for controlling the pace of the game – mixing in systematic halfcourt offense with some transition pushes, which is not all that common to see in Europe.

Maledon is already an advanced operator in pick-and-roll – showing good feel for using re-screens and patience playing with pace while waiting for slower-developing driving lanes to materialize. He is a good passer off dribble penetration as well – hitting the roll man on well-timed pocket passes, tossing up lobs on the move and engaging the big defender prior to dropping off.

Maledon hasn’t shown particularly impressive quickness to turn the corner on pure speed but knows how to manipulate the on-ball defender into the pick and has a nifty hesitation move to get by his man when that defender manages to get skinny through the ball-screen.

He is a rim level finisher in the half-court but has shown a good deal of flexibility to adjust his body in the air on double clutch finishes around rim protectors. Maledon has also flashed a resourceful finishing package, featuring lefty finger-roll finishes off a euro-step to maneuver his way through traffic and wrong foot-wrong hand layups to neutralize shot blocking threats.

Most of his value as a first-year pro came out of his outside shooting, though. Through nailing 38.6% of his 127 three-point shots last season, at a pace of 4.7 such attempts per 40 minutes, Maledon has shown to be a legit threat on spot-ups. He catches it on the hop and has a quick trigger, going through compact mechanics while launching the ball from out in front. In impressive fashion, he’s even flashed the ability to make shots without needing to bring the ball down to dip for rhythm.

Hampton is one of the most prominent high school stars to date to skip college basketball in order to play overseas, opting to sign with the New Zealand Breakers of the Australian NBL instead. He will supplement his income by signing a shoe deal with Chinese brand Li-Ning as well.

Hampton is an aggressive shooter off the bounce, often creating separation to get his shot off via in-and-out and behind-the-back dribbles. He has also shown impressive dexterity stepping into rhythm three-pointers against on-ball defenders going under the ball-screen in pick-and-roll.

Despite not showing a lot of speed with the ball or particularly impressive shake, Hampton was able to get to the basket against a set a defense at the high school level. His most powerful finishes tended to be on two-foot leaps with space to load up but he showed some versatility as a finisher among the trees as well - adjusting his body in the air for reverses and double clutch finishes, relying on his length for scoops and finger-rolls and showcasing great touch on runners and floaters off euro-steps.

Given his height, there is a pretty good chance Hampton might first see the floor as an off guard this next season. He has a quick trigger off the catch, gets great elevation off the ground and fully extend himself for a high release but tends to get low arc on his shot in his misses.

Manion has shown to have the best court vision among the players in this group. He passes ahead to speed up the pace of the game and can execute some advanced reads in pick-and-roll - making well-timed pocket passes to hit the roll man in stride and crosscourt passes against the momentum of his body to the opposite side.

Manion has also shown to be the most versatile shooter off the ball, as he’s taken three-pointers coming off pindown screens, sprinting to the ball for handoffs and relocating around the perimeter after a passing sequence that started with him breaking down the defense off the dribble.

He has a low release but due to a quick trigger, compact mechanics and an ability to get great elevation off the ground, Manion can get his shot off prior to and over closeouts consistently.

On the ball, he is deadly stepping into three-pointers against defenders getting stuck on the ball-screen in pick-and-roll and was successful creating separation one-on-one to rise in balance via step-backs, hang dribbles and jab-steps.

Manion did fine getting to the basket in high school, going up off two feet with power a fair amount, adjusting his body in the air on double clutch finishes and even finishing through contact from time-to-time but his inability to shake off Scottie Lewis in the McDonald’s All American Game and the Nike Hoop Summit suggests his interior scoring will need to be a little more reliant on craft as he moves up through the levels of competition.