Jonathan Isaac Set To Return For Magic On Monday 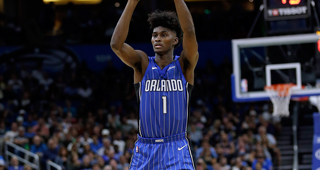 Orlando Magic forward Jonathan Isaac last played in an NBA game on August 2nd, 2020 in the bubble at Walt Disney World. That day, Isaac tore the ACL in his left knee. After a year-plus of rehab, Isaac suffered a setback with a serious hamstring injury.

Those two injuries have cost Isaac the last two full NBA seasons and over half of this season. Now, two-and-a-half years after his initial injury, the Magic expect Isaac to return to the NBA court on Monday vs the Boston Celtics.

Isaac recently appeared in three games for the Lakeland Magic of the G League. Isaac was productive, by scoring 15.7 points in 17.7 minutes per game. More importantly, Isaac looked good physically and made it out of the three contests with no physical issues.