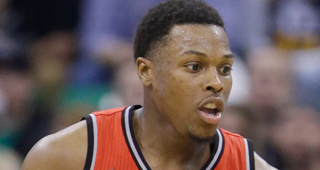 Kyle Lowry is coming off a four-year, $48 million contract signed in 2014 that was one of the best bargains of any unrestricted free agent in recent memory. As much as we’re in a constant state of bewilderment when we consider the four-year, $4 million extension of Stephen Curry, the entire NBA had an opportunity to max out Lowry.

Masai Ujiri is one of the NBA’s most calm, patient and calculating general managers. Ujiri didn’t intend for the Raptors to stumble upon this level of contention when he took the job, but he adapted to the accident of the situation and has pursued two paths at once. Whether it was simply for bargaining purposes or his sincere position, Ujiri considered allowing both Lowry and Serge Ibaka leave in free agency, but he instead kept them on shorter three-year contracts that mitigate the possibility of being stuck in cap hell. This run for the Raptors has been truly special and not worth abandoning even if it continues to stall out in the playoffs.

A few months ago there was speculation the Raptors would need to offer a fifth-year to prevent Lowry from taking a four-year max contract with a rival team, but Ujiri instead re-signed him to a three-year, $100 million deal.

Lowry finished this past season ranked 10th in Real Plus Minus and fourth amongst point guards. Nobody in the NBA was better out of the pick-and-roll last season and he’s one of the league’s best spot-up shooters.

With Toronto’s low-assist offense, Lowry had an assist rate of just 29.9, which puts him on par with Kyrie Irving and Kemba Walker.

Toronto’s five-man lineup of Lowry, DeRozan, Patrick Patterson, Jonas Valanciunas and DeMarre Carroll ranked fourth in the NBA in Net Rating at 26.8. At times during the regular season, the Raptors were the best team in the Eastern Conference. They just haven’t shown capable of taking things to another level in the playoffs. Three of those five players could be gone when 17-18 opens up as Valanciunas and Carroll could be traded to clear cap space.

Zooming out, Lowry has obvious culpability in the Raptors’ playoff shortcomings. Lowry is a 39.4 percent shooter for his career in the playoffs (.514 TS%) compared to 42.5 percent (.560 TS%) for the regular season. The Raptors didn’t crater without Lowry in the weeks he missed following the All-Star break with wrist surgery, especially on defense. Toronto could have survived with Cory Joseph replacing Lowry and dropped down to a seventh or eighth seed, but you may as well try to rebuild entirely at that point.

Lowry is infinitely more valuable to the Raptors at his annual average than he would have been to any other team, and he also has a moody, unpredictable personality even if he does consistently play hard on both sides of the floor.

There would have been an inevitability of Lowry’s contract turning monstrously problematic as a five-year or even four-year deal, especially when factoring in the eight percent raises growing so much faster than the cap. On three-year deals, both Lowry and Ibaka line up with when DeRozan can become a free agent again. The Raptors will continue to see if they can figure out a formula to win the East while waiting out LeBron James and fending off the Celtics, 76ers or Wizards. When 2020 hits, Toronto will likely begin the rebuild that Ujiri expected to start working upon in 2014.

Grade for Raptors: A

Lowry’s leverage vanished quite quickly before free agency even began when the 76ers traded up to select Markelle Fultz, then the Knicks and Mavericks also drafted point guards, followed by the Rockets trading for Chris Paul. Minnesota signed Jeff Teague as soon as free agency began. Even the Bulls decision to trade away Jimmy Butler and begin a rebuild took away a realistic free agent spot.

Only getting a three-year deal will cost Lowry a significant amount of money because he won’t come close to making over $30 million in 20-21 at 34. But at least Lowry gets to stay with the Raptors for the remaining seasons of his prime with the chance of becoming the most accomplished player in franchise history.

Grade for Kyle Lowry: B+