Counting Down To Four 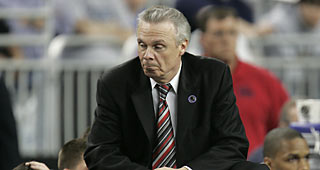 No head coach has embraced one-and-done recruiting quite like John Calipari. And many folks have viewed this season as a referendum on that approach. This season was proof that it takes teamwork, continuity, and experience to reach the highest levels of performance. Kentucky played mediocre basketball for much of the year and limped to an 8-seed in the NCAA tournament.

But a funny thing happened once the tournament was underway. It turned out that you could win big games with talented freshmen.

-It turned out that next-level size mattered. Even with a big athletic guard, Caris Levert, perfectly positioned to contest the shot, Kentucky's Aaron Harrison got off the game-winner.

-It turned out that next-level skill mattered. With all due respect to the all-around skill of Frank Kaminsky, no one in this tournament can catch the ball in the paint, and score with such ease as Kentucky's Julius Randle. He truly is the most talented back-to-the-basket player left in the tournament.

-And it turned out that even for your bench, it didn’t hurt to recruit next-level athletes. A lot of people had asked whether Kentucky would be better off with some less-skilled, multi-year players on the bench. But former Top 20 recruit Marcus Lee was more than happy to be the equalizer in this game. His four put-back dunks were special. But Lee also showed the importance of athleticism on defense with a tremendous block on a three point shot.

That three-point defense, was also the most interesting strategy in the game. John Calipari challenged his team to hug three point shooters in this game. At times, that seemed to back-fire. With the floor spread, Michigan was smart enough to attack off the dribble for easy inside baskets. (Kentucky’s season-long problem with pick-and-roll defense was also evident.) But against a Michigan team that lives with the three, forcing contested inside baskets was clearly the best strategy. And in a game where both teams grabbed a crazy number of offensive rebounds, the Wildcats prevailed.

Like it or not, the referendum against young talent has failed. Kansas may have bowed out early, but Joel Embiid was injured. Duke may have bowed out early, but Duke lacked the interior defenders for a long tournament run. Arizona may have lost to Wisconsin, but Wisconsin played brilliant basketball and Arizona lost a heart-breaker in OT. The era of one-and-done players dominating college basketball is not over.

Bo Ryan no longer has to hear that phrase, “Best Coach never to make the Final Four.”

But why did he have that reputation? People have different reasons for that statement, but the following table is how I made the argument. For all active coaches, this table shows their per possession performance in the 12 years Ken Pomeroy has been tracking the stats. In that time frame, Bo Ryan has been the fourth most dominant coach. And for the first time on Saturday, he made the Final Four.

Note: By taking the average, this type of calculation does not reward coaches who started the decade at smaller schools. Scroll to the bottom of this post for a list of the top per possession coaches over the last 5 years.

Having said all that, I do think this table is a little misleading. Bo Ryan’s biggest strength is that his teams are consistently good. But he has never been able to put together that one super-elite team that dominated college basketball. The next table shows the peak Pythagorean Rating for active coaches in the last 12 years.

Bo Ryan’s best team by this measure was the 2008 squad that went 16-2 in the Big Ten. But that was a largely defense-oriented team. And when they ran into Steph Curry in the NCAA tournament, they simply lacked the offense to keep up.

Based on this measure of peak performance, Sean Miller is now the one who should complain. Despite having a dominant team this season, he still has no Final Four trip to show for it.

For my detailed take on Wisconsin's win over Arizona, click here. I scouted Aaron Gordon from the opening tip to the closing horn. But while I focus on Gordon, Wisconsin deserves all the credit for making Gordon look like a bad defensive player. This was truly a game where outstanding offense beat outstanding defense. One possession was probably symbolic of the whole game. From 11:16 to 10:08 in the first half, Arizona played incredible defense. And the Badgers still scored.

In November, the Spartans were a heavy favorite to go to the Final Four. A string of injuries appeared to derail those plans. But after an impressive run in the Big Ten tournament, most people anointed Michigan St. as the heavy-favorite again.

But if you followed the the Spartans all year, there were signs that this type of loss could happen. This Spartans squad was explosive in transition, but beatable in the half-court. You saw the first signs of concern in the Champions Classic. Michigan St. blitzed Kentucky by getting behind the young Kentucky back-court for lay-ups. But when Kentucky made it a half-court game, the Spartans struggled.

Then the Spartans went 5-6 down the stretch in the Big Ten. This included a tough home loss to Nebraska. Most people assumed you could not learn anything from those games, because Michigan St. had so many injuries. But even on the night Branden Dawson returned from his injury and Michigan St. was at full strength for the first time, the Spartans lost at home to a struggling Illinois squad. In that game, the Spartans lost because they could not score in the half-court. In fact, Michigan St. had so little success scoring in the half-court against Illinois, that they basically gave up fouling with 30 seconds left.

Flash forward to Sunday at Madison Square Garden. Michigan St. was dynamic at the end of the first half because they were able to get out and run and take shots before the defense was set. But in the second half, Connecticut took that away, and the game flipped.

Give Bill Raftery credit. At some point when Michigan St. still had the lead, he commented that the Spartans were not getting any inside touches. And that was a season-long issue. Michigan was 10th in Big Ten games in free throw rate, and 316th in all games nationally. This was not a team that could consistently get easy paint touches in the half-court.

(Consistently is the key word. They could do this at times, but they also would have puzzling droughts.)

And then there were the turnovers. This has been a career long problem for Tom Izzo’s squads. They tend to take a lot of chances. But in 2014, that area was significantly cleaned up. Heading into Sunday, Tom Izzo’s club ranked 89th nationally in turnovers which was the best rating of Izzo’s whole career. And yet this game was full of dumb plays. There was Gary Harris with a totally unnecessary travel beyond the three point line. There was Adreian Payne inbounding the ball to Keith Appling with zero pressure, and Appling not even paying attention as the ball ricocheted off him and went out of bounds. And of course, Denzel Valentine, the one Spartan who Izzo continued to yell at game after game for making two or three bad decisions, had a completely unnecessary travel with 12:58 left in the game.

When turnovers happen in the process of trying to get an easier basket, they hurt. But when you make the kind of unforced mental errors the Spartans were making on Sunday, it is inexcusable.

And given the opportunity, Shabazz Napier did what he has done all season. In a close game, he made the decisions his team needed to win. Despite a bloodied nose from an accidental arm slap across the face, Napier was nearly perfect down the stretch.

They call UCLA’s Kyle Anderson “slo-mo” because he is so deliberate. But for Napier, when the pressure is on, the other team moves in slow motion. He gets to his spots, and he executes with precision. I hate the Kemba Walker comparison’s because I don’t think Napier has nearly the same athleticism. But he makes all his free throws. He knows exactly where he can get on the floor. And he knows exactly what is the right shot.

(Napier may not have Walker’s athleticism, but at 6:55 of the first half, he had a drive around three Spartans which was truly jaw-dropping.)

And because the Huskies were able to keep Branden Dawson from getting any post-touches, (Amida Brimah had one of the most impactful nights you can have with a club trillion stat-line), the Huskies prevailed. Despite an off-shooting night by several players, UConn is headed to the Final Four.

But I don’t want to hear any revisionist history that we should have seen this coming. Connecticut had more than their fair share of head-scratching losses this season. And the Huskies nearly lost to St. Joseph’s in the opener of the tournament. They caught a break when they faced an Iowa St. team without Georges Niang. And they played in a familiar building. This was not an obvious path to the Final Four. But the Huskies players over-achieved to get here and made it happen.

And for the trainloads of fans who made the trip down into the city, they had reason to celebrate. The Kevin Ollie era has made its first mark, proving that the UConn tradition is alive and well even without Jim Calhoun on the sideline.

Florida’s win was not without drama. It was a joy to see Patric Young make the Final Four for the first time after three straight losses in the Elite Eight. I was also enthralled with the sequence after Dayton cut the lead to 58-50. Florida held the ball for over a minute thanks to a flurry of offensive rebounds, and that possession crushed the Flyer’s momentum.

But with the game becoming a blowout late in the first half, I spent more time thinking how wise the Turner channels are to use the multi-channel simulcast approach at the Final Four next weekend. When ESPN rolled it out for college football’s national title game, it was fabulous to be able to hear the different voices and opinions call the game. And I think we need as many channels as possible in these single game situations.

I wanted a full channel dedicated to those fans sitting in Dayton, Ohio and watching the game on a big screen in an auditorium. Early on they cheered when Scoochie Smith hit a rare three. Later they were shown holding their arms up in free throw position when Matt Kavanaugh went to the line. When the game was beyond double digits, I would have rather watched that fanbase cringe at every moment then watch Dayton continue to fail to get the ball inside against the Florida defense.