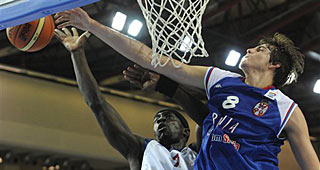 As the 14-15 Euroleague season begins, RealGM presents the ultimate positional rankings of the league's best players. In the third edition, we rank the elite small forwards from one to ten.

The 2013-14 season was arguably the best of Emir Plredzic’s career. In his seventh Euroleague season with Fenerbahce Ulker, Preldzic averaged MVP-worthy numbers of 11.7 points, 4.8 rebounds and 5.6 assists in the regular season and despite the ups and downs in Top 16, Preldzic was the most efficient small forward in the whole league. Preldzic was also dominant in the 2014 FIBA World Cup, where he once again demonstrated his versatility by averaging 12.1 points, 5.1 rebounds and 4 assists. The 27-year-old forward was also under the spotlight after hitting the shot of his career, a last second three pointer that carried Turkey over Australia. Preldzic could compete for MVP award in any of the upcoming seasons but he might have to sacrifice his statistics by involving his teammates to achieve better results as a team.

Despite his young age and EA7 Emporio Armani being loaded with deep backcourt, the 22-year-old Alessandro Gentile was one of Luca Banchi's main options in crucial moments last season. Gentile, who started playing professional basketball at the age of 16, quickly learned how to use his strong body in Euroleague and that helped him to achieve success in 13-14. Gentile also demonstrated his leadership in Italian league, where he helped EA7 Emporio Armani win the championship while Gentile was named the Italian League Finals MVP. Considering that the rising Italian basketball star was also the top scorer for the Italian national team at EuroBasket 2013, within the next three years with EA7 Emporio Armani Gentile has a great chance to become one of the youngest Euroleague MVP award winners ever.

For the second season in a row, Sonny Weems averaged more than 12 points, two rebounds and two assists per game, which helped him to make RealGM's All-Euroleague First Team of 2013-14. Weems established himself as one of the best wings in the league back in his debut season with Zalgiris Kaunas in 11-12 and it seemed that joining a winning team and will provide him an opportunity to fully reach his potential in Europe. However, in two years Weems played twice in Euroleague semifinals and both times failed to carry CSKA to the final. In last season’s final four, Weems was one of the most disappointing players as in two games he collected 14 points, making six shots out of 23 attempts, and dished out four assists.

The 35-year-old veteran Andres Nocioni proved last season that he is still capable of playing 26 minutes a game and being a leader in a Euroleague Top 16 caliber team. Nocioni collected 20 or more performance index rating (PIR) points in seven Euroleagues games, including two 35 PIR performances against FC Barcelona and Panathinaikos Athens. Nocioni decided to improve his chances on winning Euroleague title this offseason by leaving Vitoria and joining Real Madrid. Gustavo Ayon, Marcus Slaughter, Felipe Reyes, Ionnis Bourousis, Salah Mehri - Real has one of the best frontscourts in Euroleague, and as lately Nocioni spent more time playing at power forward, therefore no surprise that his role will decrease and playing time will be limited to around 15 minutes per game.

For Nemanja Bjelica, the 13-14 season was also the best of his career as he averaged solid numbers in both Euroleague and 2014 FIBA World Cup competitions. In 24 Euroleague games, Bjelica averaged career-high 10.4 points and 6.1 boards, including three double-doubles twice against FC Barcelona and once versus EA7 Emporio Armani. However, the Euroleague season for Fenerbahce Ulker ended soon while with Serbian national team Bjelica traveled all the way to the 2014 FIBA World Cup final. Bjelica led the silver-medal winning team in rebounds (6.9) as he was also one of the Top 3 scorers (11.9 PPG). As it is the case with Preldzic, Bjelica will not be the main and only Zeljko Obradovic’s option on offence this season. As Fenerbahce Ulke is once again full of talent, it is going to be difficult for Bjelica to improve his numbers, which would possibly happen if he plays for other Euroleague team.

Matthew Lojeski had a difficult task in replacing Kostas Papanikolaou in his debut Euroleague season for the back-to-back champions. By using his versatility, Lojeski did that surprisingly well - he helped Vassilis Spanoulis to lead Olympiacos all season long and was surprisingly persistent throughout regular season, Top 16 and the playoffs as he averaged more than 10 points, 3.5 rebounds and 1.5 assists in each stage. Despite being his first Euroleague season, Lojeski was also a big threat behind the three-point line as he scored three or more long-range shots in eight Euroleague games last season. Lojeski revealed his intentions to have a bigger role this season, which means that if Olympaicos stays on winning track, Lojeski might become a serious contender for the MVP award.

Jonas Maciulis’ performance in 13-14 could be divided in two parts - Euroleague regular season and the rest of the year. Maciulis was one of the Panathinaikos’ leaders in regular season where he averaged 12.3 points and 5 rebounds and played his career game (19 points and eight boards) against Laboral Kutxa. Then Maciulis disappeared in Top 16 as his scoring averages dropped from 12.3 to 5.6 points per game as all his shooting percentages went down as well. The absence of few key Lithuanian national team players gave Maciulis opportunity to become a leader but the 29-year-old forward failed to use the chance. Despite Maciulis being one of the key defensive stoppers in 2014 FIBA World Cup, his contribution to team’s results (6.9 points and 2.1 rebounds per game) was far behind the expectations.

Tremell Darden played an important role in last year’s Real Madrid team and was an important figure during Real’s 31-game winning streak. Darden started in 30 out of 31 Euroleague games last season and despite his statistics does not reflect that, he was one of the best defensive stoppers in the whole league. His direct opponents averaged only 6.3 points in 19.4 minutes while facing Darden, which helped Real become one of the best defensive teams in the Euroleague. Due to his specific role, Darden will never be considered as a contender to win Euroleague MVP prize, but he still holds a chance to win the Euroleague Best Defender award within the next two years with Olympiacos.

While playing for three different Italian teams since 2010 (with a break in 12-13), James White was undoubtedly the best scorer in Legabasket Serie A. White, who averaged no less than 17 points per game in each of those three seasons, comes to Euroleague after winning EuroChallenge trophy with Grissin Bon Reggio Emilia, where he was also the most efficient player on the team. The 32-year-old forward averaged 15.8 points, 4 rebounds and 2.6 assists per game, including his 17 points on 5-of-8 from the floor, four rebounds and two assists performance in the final game. After White registered a double-double in his Euroleague opening game, it seems that the new leader of Unics has ambitions to be make it into the Euroleague MVP conversation too.

Stratos Perperoglou had a career year last season after successfully taking advantage of playing some minutes at power forward due to the injury Georgios Printezis. When Printezis was out, Perperoglou played his career game against FC Bayern, scoring 25 points, grabbing four boards and finishing the game with 28 PIR points. Perperoglou collected 20 or more PIR points in four Euroleague games last season and solid performance helped him to secure a new two-year deal in Turkey with Anadolu Efes. Perpreroglou is reunited with Dusan Ivkovic again and as Anadolu Efes frontcourt is loaded with talent, Perperoglou should be again Ivkovic’s main option at small forward position.