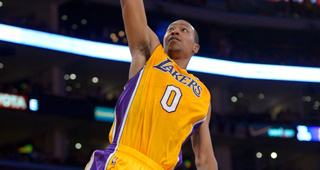 As the Euroleague Top 16 stage nears its completion, RealGM presents Top 10 Euroleague Rookie Ranking, where we ranked the best players who made their debut in Euroleague during the 14-15 season. Like in previous seasons, Americans dominate the ranking, occupying seven out of top ten spots.

Neptunas Klaipeda, which won four out five home games in the regular season, was one win short from creating a sensation and making it to the Top 16. Neptunas was almost unbeatable at home, while its biggest star, Deividas Gailius was blossoming in front of Neptunas’ fans eyes. Gailius, a candidate to join Lithuanian national team, averaged 11.6 points (33% 3FG) and 4.4 rebounds in away games and was by far more productive at home, where he collected 17.8 points (50% 3FG) and 5.2 boards per game.

Due to financial problems, it has been a very difficult year for Galatasaray Istanbul as the Turkish team lost nine Euroleague games in a row and does not hold any chances to advance to the playoffs. However, Patric Young, who just started his career in Europe in December, uses the opportunity to make his name known in the Euroleague by putting great performances against elite European teams. Young scored 11 points and grabbed 14 rebounds against FC Barcelona, then two weeks later had 19 points and eight boards versus Real Madrid. Finally, physically gifted Young scored 24 points and collected nine rebounds against Panathinaikos Athens last week and if Galatasaray had won the game, Young would have won the MVP of the week prize.

Six years, six different countries - 28-year-old Alex Renfroe, who did not have a guaranteed contract until January, has finally found a place where he can prove himself as a reliable point guard on a winning Euroleague team. Renfroe is the only player in the Euroleague this season that ranks in top ten in assists category and is in top five in steals. Renfroe has also been very consistent in last five games as he collected at least 14 performance index ranking (PIR) points in each of the match. His consistency will be needed in the next two do-or-die type of games for ALBA, where the German club will have to beat Panathinaikos and Maccabi in order to make it to the playoffs.

After starring in the Eurocup last season and now being a key piece in a candidate to play in the playoffs, no surprised that Reggie Redding started to draw a lot of attention before becoming a free agent this summer. Redding has been great all season long and has reached his peak in March. The 26-year-old guard averaged 15.8 points, 4.8 rebounds and 5.8 assists throughout last five Euroleague games. ALBA will be trying to keep Redding, but that will be a very difficult task to do as elite Euroleague and even NBA teams expected to make offers for one of the best Euroleague rookies this season.

Even though the Euroleague season was quite short for both Bojan Dubljevic and Valencia, the center’s debut did not go unnoticed. The 23-year-old was one of the best shooting big men and the most efficient scorer in the Euroleague. Dubljevic leads the league in points per 28 minutes (19), while also demonstrating amazing shooting accuracy. Valencia’s center was three three-pointers short from meeting the minimum requirements and joining Euroleague elite 50-40-90 club. Dublevic hit 55 percent from short distance, 43 from beyond the arc and 92 from the line, while averaging 15.5 points per game.

James Anderson has been one of the biggest offseason steals in Euroleague, making his name known in Europe by carrying Zalgiris Kaunas on his back all season long. Anderson has been more impressive during the regular season, where he averaged 17 points, 5.7 rebounds and 2.3 assists, but there is no doubt that former Oklahoma State star will be ready to join one of the title contenders next season. Anderson has been also praised for his work ethic, down-to-earth personality and professionalism, which makes him an ideal candidate to join any of elite Euroleague teams.

Jamel McLean’s game-winning running bank shot from about 15 feet as time expired, which helped ALBA Berlin defeat the San Antonio Spurs in October, was only a beginning of a great year for both McLean and ALBA. McLean was a dominant player inside the paint throughout the regular season, where he averaged 14.3 points, 5.7 rebounds and 2.3 assists. The forward’s individual numbers have slightly dropped in the Top 16, but with only two games to go, ALBA chances to advance to the playoffs and make the biggest sensation of this Euroleague season are still alive.

Nizhny Novogorod has been one of the biggest surprises in this Euroleague season and that have not been possible if not amazing Euroleague debut of Trey Thompkins and Artsiom Parakhouski. Thompkins, a former star of Georgia Bulldogs, was great in the regular season as he averaged 12.9 points and 7.2 rebounds per game, before turning into a dominant offensive player. Thompkins averages 16.6 points, 9.5 rebounds per game in the Top 16 as he already had five double-doubles in 11 games. If Nizhny Novogorod had been more competitive and had more success in the last two games (they lost each by four points), Thomkins undoubtedly would have been in the MVP conversation.

After having success in 2013-14 Eurocup season, where his team Hapoel Migdal Jerusalem was eliminated by Nizhny Novgorod in quarterfinals, Parakhouski joined the Russian team and continued to raise his value in the European basketball market. After improving free throw accuracy from 57% to 71% and playing alongside Taylor Rochestie, Parakhouski became one of the most efficient centers in the Euroleague on both ends of the floor. Moreover, Parakhouski is a blocked shots leader in whole Europe. Until now, the big man blocked 91 shots in 45 games played in Euroleague and VTB league, beating Walter Tavares, who blocked 85 shots in 47 games.

Fenerbahce Ulker’s head coach Zeljko Obradovic had plenty of confidence in Andrew Goudelock, which did not let the legendary coach down. Goudelock is the only Euroleague rookie to average more than 29 minutes per game and that worked well for Fenerbahce Ulker, which improved its winning percentage from 58 in 2013-14 to 82 this season. Goudelock ranks fourth in scoring (16.8 points per game) and second in three-point shooting percentage (48), which makes him one of the best offensive players in the league while playing for a title contender.