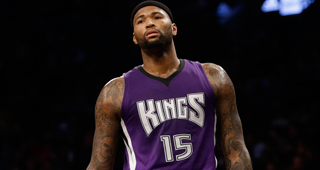 Last week, I dove into the (impossibly exciting!) topic of defending the post; specifically looking at the use of double teams. I threw out a lot of numbers, charts and an overly-elaborate poker analogy to paint a picture that NBA teams should avoid double-teaming at all costs. The basic reasoning was that bringing the extra defender to the block in hopes of alleviating the strain of a perceived disadvantage, does more harm than good. The subsequent scramble after the ball moves out the double team produces a rotational quagmire that trades out the possibility of a short-to-mid-range 2’s for shots much more devastating to NBA defenses -- three-pointers, drives to the rim or fouls.

But what is essentially a black-and-white answer doesn’t exist in a sport that operates within a giant gray area like basketball does. So while in general a case can be made that NBA head coaches should avoid the use of double-teams, there are exceptions. In an attempt to complete the discussion, here’s a list of few situations that likely make a doubling the post the proper play.

Exception #1: Not over, but around and through.

What incriminates bad post defenders or identifies mismatches that will inevitably lead to bushels of rim attempts or fouls are simple visual cues. If the post defender looks like a traffic cone, suspended in the same space while his opponent spins or explodes by him in a single step en route to the basket, that’s matchup in need of a double a team. Same goes for post defense that looks something like this:

Such overwhelming strength advantage -- like in the case where Denver’s veteran wing Wilson Chandler backs Sacramento rookie Nick Stauskas all the way from the block to the charge circle before lofting a short hook shot -- is one that will no doubt produce a higher points per possession than any pass out situations after a double team.

If these types of matchups exist, whether it’s due to a switch of a screen or just standard lineup selection, changes have to be made. Most times, it’s that the offending defender gets removed from the game. Yet if the player in question provides a lot of offensive value in the form of shooting, playmaking or scoring, it can be a rash decision to pull him strictly because of defensive deficiencies. That’s where a coach has make a tough decision -- from a value standpoint -- on whether the results from protective double teams can be outdone by the that player’s impact on the other end of the floor.

A great example of this was during the most recent playoff battle between Memphis and Oklahoma City where the Thunder (randomly) played small with Kevin Durant at the four. The resulting cross-match had Durant guarding either Marc Gasol or Zach Randolph, two stout players with the physical prowess to maybe not put Durant in the basket, but certainly wear him out through repeated post up attempts. Thats where a head coach, like OKC’s Scott Brooks would have decided if the results from doubling either Gasol or Randolph when they posted Durant could be outdone by the production of the Thunder’s star on offense. And that situation also contains our second exception….

Anyone who has ever stood next to an NBA frontcourt player knows that these human beings are abnormally large and (in most cases) strong. It’s probably not a shocking to realize then that it’s exhausting to guard someone that’s 6-foot-11 and 270-pounds, like DeMarcus Cousins, when he spends entire games banging his hips, elbows, shoulders and whatever else into you. Trying to handle player’s like Cousins 1-on-1 from just a physical standpoint is hard. Doing so within NBA rules under the watchful of inconsistent and sometimes whistle-happy officials, makes it even harder.

And for teams with depth issues in their frontcourt, like say, Portland -- team that is 4.3 points per 48 minutes better with Robin Lopez on the floor -- it’s essential to keep their key players on the floor as long as possible. Having Lopez battle with a foul-magnet like Cousins 1-on-1 for an entire game may lead to more ideal shot distribution for the Blazers defense, but it could also lead to limited minutes for Lopez if he racks up fouls. The more indispensable a player is to his team’s overall, or maybe even just their offensive, success, the more important it is to find ways to decrease both his foul count and energy output.

Besides, double teams can also produce a very good outcome for defenses….

While some players, like Marc Gasol or Nene, would welcome two defenders coming at them in the post like a great NFL quarterback loves to pick apart a blitzing defense, not every NBA post player is well-versed at passing out the post. Putting pressure on players that struggle to navigate double teams -- a great example being former NBA center Andrew Bynum -- can be a win-win for a defense.

When it comes to someone like Bynum, the notion that a double team leads to open shots elsewhere is far from a certainty. Because if the player facing an additional, onrushing defender can’t make the correct read on the pass out, a defense receives additional time to scramble and reset.  That means they can possible avoid not just a shot from a dangerous post player, but a resulting one from a perimeter player capitalizing on the chaos; all while the shot clock sees precious seconds tick off. In a sense, players like the former NBA vet can allow defenses to both have their cake and eat it too.

This type of outcome is also possible in lineups where bigs are surrounded with poor shooters, like Gasol and Randolph in Memphis. While Gasol is an expert passer, it’s hard to generate consistently good offense if the ball moves out from a post double team, gets pinged around and ends up in the hands of Tony Allen (or even Jeff Green). Defenses would happily live with Allen or Green launching long jumpers hovering at or below 30 percent from 3-point territory (Allen is at 25 percent from 3, Green is at 32.4). Now it’s not always about shooting, as the Grizzlies somewhat make up for this by a passer like Gasol pick up cutters (like Allen) slicing through a rotating defense. It’s possible they could still pick double teams apart, it’s just a lot harder for teams like Memphis to do it.

Now the final outcome that might make double teams a worthy tactic is that one of the aforementioned circumstances -- a bad post passer or a bad shooting team -- can create a fertile ground for forcing turnovers. Not only could a bad post passer make the wrong read, he could end up throwing out to the wrong team. And it’s a lot easier for help defenders to gamble on such passes when the player they are guarding can’t punish them upon receiving the ball while standing in acres of space behind the 3-point line. In fact, it’s this type of scenario that leads to our final exception…

One of the scariest things about the Miami Heat during their four-year stretch with LeBron James and Dwyane Wade wasn’t what they could do with the ball, but what they did on defense without it. For most players, being caught “gapping 2” -- or playing center field between two players while a teammate rotates to a more dangerous area -- is a disadvantage. James and Wade flipped the script in that situation.

Trying to throw a pass out with one of those two roaming the weakside of the floor like the basketball versions of former Baltimore Ravens' safety Ed Reed, was a dicey proposition. An opposing player getting it wrong meant their pass ended in a SportsCenter highlight for James or Wade at the opposite end of the floor. It was all part of the grand vision in building those Miami teams -- get mobile, athletic players, that may not (James and Wade withstanding) have the traditional bulk for their position and play an aggressive, attacking style of defense. What you give up in open shots on one end, you’ll get back with players like Wade and James having run outs off turnovers.

Such a philosophy is certainly high risk-high reward and was not coincidentally dissected often during the Heat’s run to four Finals. But there is certainly merit to double-teams if your personnel meshes with playing that type of volatile style. And while it’s unlikely we’ll see another team commit wholeheartedly to such a strategy, there are certain lineups that are deployed by teams throughout the league -- like the Milwaukee Bucks injury problems forcing them into using Giannis Antetokounmpo as a center -- that would combine well if the team committed to training this aggressive tactic for situational use.