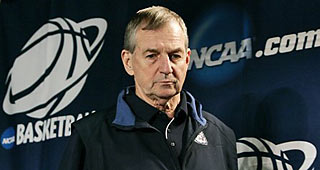 Despite the fact that Denham Brown hasn't received his second chance in the NBA yet, the UConn alumni still can be proud of scoring 111 points in one game and being the NCAA champion.

Brown averaged 10.7 points and 4.4 rebounds during his senior year and the Canadian was selected with 40th in the 2006 NBA Draft pick by Seattle Supersonics. However, after a short stay in the NBA, Brown has started his journey between the D-League and overseas.

The 28-year-old guard is currently playing for Dnipro Dnepropetrovsk in Ukraine, where Brown averages 13.6 points, 5.8 rebounds and 2.9 assists. Brown told RealGM that he enjoys overseas life but this summer he will try to return to the NBA.

RealGM: Do you remember the game you scored 111 points? Could you tell me more about that night?

Brown: It was the last game in my high school career. We didn’t make the playoffs, therefore I wanted to leave high school with a bang and add on to my legacy as a basketball player. It was my day but at the same time I had a plan to score 100 points in one game. It was the game that was called for senior as my last game. We just shoot normally and I got on fire couple times. I had really great quarters, where I scored about 36. The final score was 150-58. As a team, we were scoring a lot of points.

RealGM: Your next career stop was with Jim Calhoun and the UConn Huskies. What are your best memories from those days?

Brown: Definitely, the championship year. It was a memorable year. We were collectible as a team. We had about ten NBA draftees on that team. Just playing with those guys for that year is really memorable. It lasts forever. I still remember that time I spent with those guys, being in the tournament and having a bunch of fun.

Brown: Yeah, I’m still a big UConn fan. I was there and worked with those guys for couple of weeks last year in November.

RealGM: In your opinion, what happened to make your NBA stay so short?

Brown: I was young and I made a couple of mistakes as a person, not as a player. As a person, I really wasn’t mature; I haven’t dealt with NBA aspects. I played in the D-League the following year and I was a candidate to win MVP award and it was the same year I was cut from Seattle. As a basketball player, I’m still growing and more importantly as a player off the court and dealing everything out of the court business side. I’m really mature in that aspect now.

RealGM: What was wrong with the D-League that you decided to go overseas? Is it all about money?

Brown: As I said, I dominated in the D-League and I didn’t get a call-up. I felt that I needed to expand my play overseas. I had nothing against overseas and I think the D-League was looking for a specific type of player at that time. As it is right now, D-League is getting more financial help and more media attention than it was four or five years ago. Just being overseas is a great experience. The lifestyle, its a lot different from back home in Canada and U.S. At the same time, they still love basketball and just me playing here is a great experience too.

RealGM: Talking about overseas life, did anything surprise you?

Brown: I felt really comfortable in all these countries I’ve been. I’ve been in Turkey, Italy, Philippines, now I’m here in Ukraine and I also spent couple of weeks in Poland. In every situation where I went I was comfortable. The type of living, the food is very good. It’s the place, where I can bring my family and this is the most important thing.

RealGM: Is there a place for the NBA in your future plans?

Brown: Yes, I’m planing to try for the NBA teams this summer and we’ll see what else will happen. If that won’t happen, I’ll comeback overseas and I’ll make career over here.

RealGM: Do you plan to try to make it to the Canadian national team?

Brown: Yes. I took a couple years off from the national team to continue my career as a basketball player as individual. We played in the world champioship and we didn’t do too well. We had a pretty young team and couple of older guys were injured. In the following years, I’m still going to be with the national team and 100 percent dedicated to them.