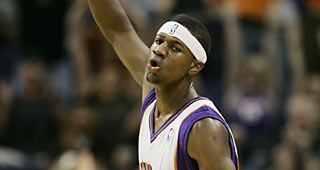 D.J. Strawberry, a 25-year-old swingman out of Maryland, faces new challenges in Europe. Strawberry is currently playing for Lithuanian champions Lietuvos Rytas Vilnius and is tryng to adjust to the European basketball. Strawberry has to play the point guard position after Khalid El-Amin suffered a season-ending leg injury.

Strawberry admits that being a point guard in the U.S. and Europe is completely different and it is harder than expected. However, Strawberry, who averaged 6.6 points and 2.8 assists in the Euroleague, doesn’t even think about complaining and he’s taking this uneasy challenge.

RealGM: What are your memories from the season you spent with Phoenix Suns?

RealGM: How hard was it for you to watch the 2007 NBA Draft, waiting to be picked 59th overall?

Strawberry: It was a little tough. I thought that I will go a little bit higher but you never know what will happen on the draft. When the draft came, the names kept going and I didn’t know what to expect. I thought ‘Hey, I may not get picked today’. I was definitely nervous, but it was a good experience though.

RealGM: If you could go back in time, would you do anything different to remain in the NBA longer?

RealGM: Mike D’Antoni, your former coach, is known as an offense specialist, while your strongest side is defense. Is it right to say that you wasn’t that type of player he wanted and this is one of the reasons you didn’t fit into Suns system?

Strawberry: No, because he even helped my offensive game. While I was playing in Phoenix, I played well on my offensive end. Also, we had defensive guys like Raja Bell so you can’t say that. Bell got a lot of minutes on that team. You can’t say there wasn’t a fit. I think we just had all veterans and just two young players, me and Alando Tucker, on that team. You can’t expect a lot of minutes when you have all veterans in front of you. I think that’s what it was.

RealGM: Did you think a lot about going overseas at that time or was it more of a one-day decision?

RealGM: Your first stop overseas was Italy. Was everything alright for you there?

Strawberry: We had a great team. We had guys like Marcelo Huertas, Jamont Gordon and Qyntel Woods. We had a really good team. That was a really good experience for me. I still talk to those guys when I see them or on Facebook. I developed some great relationships there. It was a good experience and good basketball. It was definitely a good time.

RealGM: However, you didn’t get your salary in Italy. Were you afraid to come to Europe again?

Strawberry: All parts of that (financial) situation were bad, but other than that the whole team and organization was good. Obviously, I was a little bit scared to come back overseas after not getting my salary. Things happen for a reason. I just look at that as one of those things which happened in my life. I cannot go back on it, or think bad about other teams because one team didn’t do something. It was a good experience and now I’m back and playing and having a good time here.

RealGM: Do you think the fact that you are guaranteed to get paid could be another advantage for the D-League?

Strawberry: I think the D-League is only for guys who think they are going to be called-up. If you’re in a situation like mine, where you maybe have a chance to come back to the NBA, D-League is good. It also helps to create your resume. If you played for a small school, make your resume and then go overseas or even get called-up in the NBA if you had a good season. D-League is great. I had a good time there. I had good coaches.

Strawberry: Actually, this is the first time I have had to run a team. Usually, I’m a two guard and I’m coming back at the one, but now I have to play point guard all the time. That’s really not my strenght and I’m learing as we go. I’m learning everything, learing all the plays, when I can take my shots and when I have to get everybody else involved. This is kind of difficult for me. But it’s a learning experience and I’m taking this challenge. I’m a competitor so as long as we win games, it doesn’t matter.

RealGM: You and Khalid were the only Americans on the team but at the same time. Is it easier to be on a team with another American player?

Strawberry: It’s definitely easier to be with somebody that is from where you are from. You talk about things like going to America, basketball, the NBA. We watched the Super Bowl together. Khalid is a great guy, told me a lot about basketball, being a professional, coming in and working hard.

RealGM: You’re playing along with NBA prospect Jonas Valanciunas. What is your opinion about him?

Strawberry: We call him “Big Time”. I’m telling him that sky is the limit for him. Being as tall as he is, his agility, athletisism and he’s 18-years-old. I look at him as a guy like Pau Gasol. He’s just like him. I told him, ‘work on your game, get your mid-range game down and you’re good’. Jonas is a great player for an 18-year-old and he has a long way to go, learning the game a little bit but that’s going to come with more experience he gets. I’m glad I have a chance to play with him because just playing with him makes the game easier. He’s blocking shots, dunking and he loves to run the floor, dunk and get crowd excited. That’s what he loves to do.

RealGM: Do you plan to make a comeback to the NBA? Is it your goal?

Strawberry: My goal is to just continue to play good basketball. Wherever that is. It’s just to continue playing, continuing to have fun while I can play. You can’t play this game forever. While you’re able to play, you should just have fun, play hard and enjoy the experience.

RealGM: With the NBA Playoffs approaching, who is your pick to win the title this year?

Strawberry: Lakers. I’m from LA and I have to go with the Lakers. But the Bulls are surprising me and they might win the East. I don’t know yet, we’ll see but playoffs are going to be interesting this year.