Does Missouri Possess The Best Transfer Class In History? 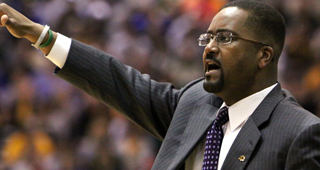 Missouri left the Big 12 with a bang. In their final season in the league, the Tigers won 30 games, earned a two-seed in the NCAA tournament, and won the Big 12 conference tournament title. But with five players graduating from a seven-player rotation, 2012-13 seemed like it would be a rebuilding year. Yet that was not Frank Haith’s plan. Thanks to the return of an injured Laurence Bowers (arguably Missouri’s best player in 2010-11), and the addition of four key transfers Oregon’s Jabari Brown, Auburn’s Earnest Ross, Pepperdine’s Keion Bell, and Connecticut’s Alex Oriakhi, Missouri has a chance to compete for the SEC title in its first year in the league.

In fact, with such an impressive transfer group debuting this season, it is worth asking if this might be the best transfer class ever. After all, has anyone ever brought in a transfer class that included a former national champion who was once a consensus Top 20 recruit, another consensus Top 20 recruit, the second leading scorer in the WCC, and the leading scorer and top minutes player on an SEC team in the same transfer haul?

I’m sure you can find examples of teams that have added higher ranked recruits via transfer. Iowa St. might have staked that claim last year with transfers Anthony Booker (RSCI #83), Chris Allen (#38), Royce White (#31). But in looking at data from the 2005 season to the present, no team has ever brought in a more prolific group of scorers at the same time. Oriakhi, Brown, and Ross have all been out-of-this-world producers at their previous schools.

Most Prolific Transfer Classes from 2005 to the present

Taking the Points Produced measure (the numerator of the ORtg formula that assigns credit for scoring, assists, and offensive rebounds), here is the production for these players in their last season with the previous team:

This probably understates how prolific these players were. Keion Bell was once responsible for producing 557 points in a season, but he was suspended for conduct detrimental to the team in his last year at Pepperdine. Alex Oriakhi created over 403 points in UConn’s national championship season. And Jabari Brown played only 2 games last season before he decided to transfer. But even using these non-peak statistics, from 2005 to 2012, no team came close to bringing in this kind of production in one transfer class.

The reason Missouri’s class is so unique is because players that produce a large amount of points are rarely available for transfer. Missouri happened on to three unique situations. Bell was essentially dismissed by his former team. Oriakhi’s team was banned from the NCAA tournament. And Ross’ team had changed coaches and had one of the worst stretches of basketball in school history. It was the perfect storm that helped Missouri’s transfer class to come together.

Other teams have added prolific scorers before because of similar unusual circumstances. For example, when Centenary College left D1 for D3, South Alabama picked up two of the team’s leading scorers Nick Williams and Gary Redus. When combined with Oakland transfer Tim Williams that gave South Alabama three players who had a combined total of 945 PP at their previous team.

But in terms of typical transfer recruiting classes, Tony Barbee might have put together the next most prolific at UTEP:

Keep in mind that Christian Polk produced 320 points as a freshman at Arizona St. before Herb Sendek came in and Polk became cemented to the bench as a sophomore (producing the 71 points seen here). As for the others, Strong was very solid scorer at San Francisco, Williams had a solid year at Colorado before spending a year at Junior College, and Louisville’s Derrick Caracter needs no introduction.

San Diego St. has also added their share of marquee transfers over the years. The most prolific transfer class came when Tyrone Shelley and Malcolm Thomas joined the team. Both had produced over 400 points in 2008 and they were not happy with Tom Asbury returning to coach Pepperdine. They hit the market together and both decided to make their way to SDSU. Shelley and Thomas were joined by Illinois transfer Brian Carlwell who had just spent a year sitting on the bench. The 860 combined points they brought to SDSU in 2010 were impressive.

Among BCS teams, the closest example is indeed Iowa St. last season. The Cyclones added four players, three of which had solid scoring averages for their previous team:

Chris Allen had a disappointing season in 2010 at Michigan St. producing only 285 points (down from 294 in 2009), but it is clear that Iowa St.’s great class of transfers didn’t have nearly the historic production as Missouri’s current transfer class.

The best news for Missouri fans is that San Diego St., UTEP, and Iowa St. all made the NCAA tournament the year these great transfer classes enrolled. (South Alabama did not.) It may be hard to build chemistry in such a short period of time, but teams have done it before.

Of course the thing you may have noticed is that I have been talking about prolific scorers not efficient scorers. There is no scoffing at Earnest Ross’ 103 ORtg at Auburn. The fact that he was that efficient on a miserable Auburn offense was nothing short of miraculous. And while I have my qualms about Oriakhi’s 99 ORtg last year, he’s shown that in a balanced offense he can be dominant. The real question is Keion Bell. Bell had an ORtg of 98 last year which sounds troubling. But Bell’s low efficiency really was a product of his high shot volume. Bell used 36% of the possessions when on the floor at Pepperdine which was a huge number. If he used about 10% fewer possessions, based on volume/efficiency translations, his ORtg would really be about 110 which would be solid.

And oddly enough, that is why I think this experiment may work for Frank Haith. Last season, he slowed Missouri down very slightly and got them to play at an even more efficient level. This year he just needs to get his shooters to be slightly more selective, and play at a more efficient level. If it works, the Tigers will be competing for a league title once again.