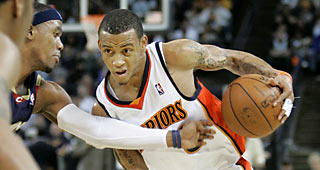 The Warriors sent a letter to Monta Ellis? agent, Jeff Fried, stating the team relinquishes its right to void his contract for the scooter accident, according to a source.

Ellis was suspended 30 games, costing him $3 million, after he injured his left ankle (requiring surgery) and lying about it.

The Warriors now hope to repair the damaged relationship with their franchise player.