Artest Wants To Remain With Lakers 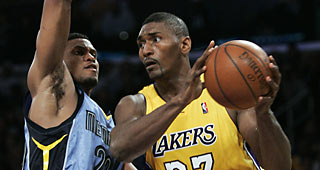 Ron Artest and the Lakers attempted to downplay a report from ESPN that stated he was interested in being traded from the team.

"I just wanted to get some breakfast and go to practice," said Artest. "You can't worry about it."

"I don't get the sense Ron's not interested in being here," Derek Fisher said.

Artest was admant that he doesn't want to be traded.

"I feel good every day," Artest said. "We've got a chance to win multiple championships here...trying to work towards another banner."