Buss: Kobe Should Have Been Contacted On Brown Decision 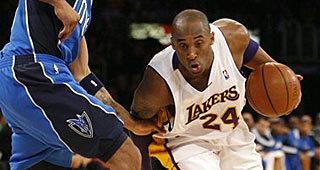 Lakers owner Jim Buss expressed regret that Kobe Bryant was not consulted about the hiring of Mike Brown.

"Looking back on it, we should have contacted Kobe," Buss says. "Kobe said it was management's job to pick a coach. He just said, 'Defense first.' That's what we were doing, but we should have reached out to him.

How will Kobe take to Brown?

"The way Mike impressed the three of us, I would think Kobe would be impressed as well," he says. "Mike is a workaholic and Kobe is the workaholic."

If Brown couldn't control LeBron James on offense, how is he going to do so with Kobe?

"I've seen Kobe go off the place a few times, but I'm sure the coach will know how to handle it," Buss says. "My dad loves Kobe and so do I; we think he has a lot left. And I know Mike has some ideas on how to elongate Kobe's career."