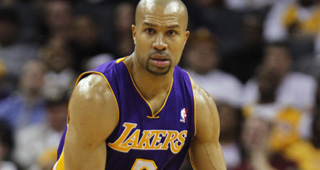 Doom and gloom descended on the NBA’s labor negotiations Wednesday, with union officials revealing that the owners’ original insistence on a hard-cap system with shorter and non-guaranteed contracts has not changed during the 18 months since the bombshell proposal was made.

“There’s no hiding the fact that the main components of what we originally received in their proposal has not changed at all,” said Lakers guard Derek Fisher, the president of the National Basketball Players Association.

That proposal, submitted to the players in January 2010, called for nearly a 40 percent salary rollback derived from a hard-cap system that would eliminate guaranteed contracts, shorten contract length and cut annual raises by as much as two thirds. Despite counterproposals by each side since then and three bargaining sessions during the Finals – including nine hours in the past two days – there has been “little or no movement on the part of the owners,” said Billy Hunter, executive director of the NBPA.

Asked if the owners or their negotiators have directly informed players that they will be locked out July 1 if they do not accept these changes, Fisher said, “Yes they have. That’s the best way I can put it. It’s very clear that if we don’t agree to what we’ve been offered so far, we’re probably facing a lockout.”