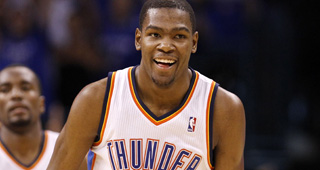 "Why cant players have freedom of movement?" asked Durant. "Teams trade players like cards, but you get mad when a player decides to go to another team. Double standard."

Durant pointed out that players often take less money in order to have the freedom to pick their destination.

"I'm all for player movement," said Durant before adding that he loves playing for the Thunder.

Durant's comments drew the attention of the NBA's Labor account on Twitter when it was broached that the Thunder would have difficulty re-signing their core..

"Not true on new deal limiting chances to keep team's core," said the writer of the account. "Teams would have cap exceptions to re-sign their own free agents."

Deron Williams responded to RealGM's Tweet of this story on Friday.

"He has the right to be," wrote Williams, who then added a hash-tag of "NotJustAboutBRI."