Lockout To Be Lifted As NBA, Players Agree To New CBA 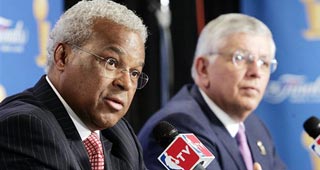 The NBA and players have reached a tentative agreement on a new collective bargaining agreement. The deal sets in motion a series of steps to end the lockout and play a 66-game schedule in the 2011-12 season, with opening day on Christmas.

David Stern told the media that training camp and free agency would likely begin on the same date, December 9.

At approximately 3 a.m. EST after a meeting that lasted over 15 hours, word began trickling in that the two sides had reached an agreement in principle. Ken Berger of CBS Sports broke the news on Twitter.

The sides waged a long, often bitter battle over the parameters of a new CBA. The process stalled on several occasions and seemingly fell apart when the union disbanded on November 14 and the players filed antitrust suits against the owners the next day.

But talks resumed on Tuesday as both sides went back to the negotiating table in search of a resolution.

The dismissal of lawsuits, negotiation of B-list items and ratification votes can now proceed.