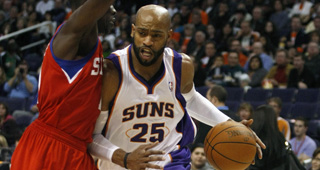 The Phoenix Suns will move forward without Vince Carter on their roster.

Carter’s full $18 million salary for this season would have been guaranteed if not released within 72 hours of the official start of free agency.

By waiving Carter, the Suns will save $14 million by paying him the guaranteed $4 million stipulated in his contract.