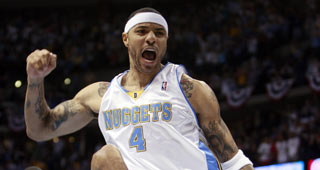 The Xinjiang Flying Tigers in China are giving strong consideration to releasing star forward Kenyon Martin, according to sources close to the situation.

If Xinjiang goes through with the move, it would be the test case for established NBA players who signed in China during the lockout to possibly return to the NBA sooner than expected.

Sources told ESPN.com that only the threat of serious sanctions from Chinese league officials for releasing a player of Martin's stature in-season, including the potential forfeiture of games, has stopped Xinjiang from making the move already.