Lopez Admits To Being Lazy On Glass, Advocates For Humphries' Return 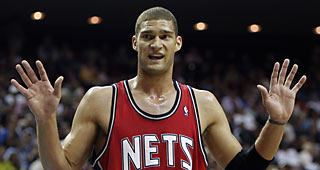 Nets center Brook Lopez admitted he didn’t go after as many rebounds last season — partly because he “was being lazy” and also somewhat because Kris Humphries cleaned the glass so effectively Lopez said he would often “leak out” on shots by the opposing team to try to get a head start down to the offensive end.

Speaking of Humphries, Lopez was asked whether he wishes the team would re-sign the 6-9 free-agent rebounding machine.

“I’m not going to say, ‘No’ to Kris,” Lopez said. “There’s no question he helped us last year. Obviously, that’s not really in my hands. He’s doing his thing, working out in Minnesota, and that’s between the Nets or whatever team would have him. But I’d like to have him back here, yes.”