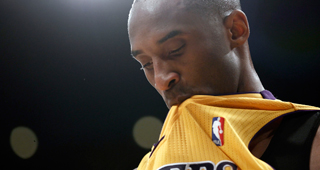 Kobe Bryant criticized Pau Gasol for throwing away a pass with 33.9 seconds remaining in the Lakers’ 103-100 loss to Oklahoma City on Saturday.

Kevin Durant hit a three-point shot on the next possession to give the Thunder the lead for good.

"Just a bad read on Pau's part," Bryant said. "He's looking to swing the ball too much. He's got to take his shot.

"Pau's got to be more assertive. He's the guy they're leaving [open]. When he's catching the ball, he's looking to pass. He's got to be aggressive. He's got to shoot the ball or drive the ball to the basket. He will be next game."

Gasol accepted blame for the turnover, but contended that his mistake wasn’t the sole reason the Lakers lost Game 4.