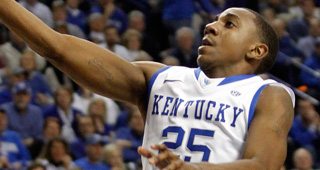 Marquis Teague is close to signing his first contract with the Bulls.

“I’m about to get it figured out when I go back,” said Teague, who is currently working John Calipari’s youth basketball camp at the University of Kentucky. “We just pretty much came up with something. So as soon as I go back to Chicago, it’ll be done. We’re right there. We’ll figure it out.”

Of the league’s 30 first-round selections, only Teague remains unsigned.

Teague admitted to being initially surprised at Chicago’s decision to select him with the 29th pick in the draft.

“I knew they liked me a lot,” Teague said. “They had called my agent and things like that. But yeah, it kind of surprised me that I went there. I feel like I’m just going to come in, try to bring a lot of energy, pick up on defense full-court, just try to change the game as much as I can.”