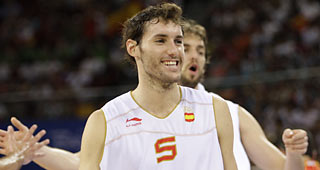 Rudy Fernandez was punched in the face by a Lithuanian fan following Real Madrid's 105-104 win over Zalgiris Kaunas in Euroleague play on Thursday.

Fernandez was bloodied by the punch and went straight to the airport. Real Madrid had a security guard with the team but he reportedly did not react fast enough to prevent the assault.

The assailant has been arrested.

Fernandez had 11 points and four assists in the game.