Kobe 'Always' Reminds Shaq About Two Championships Without Him 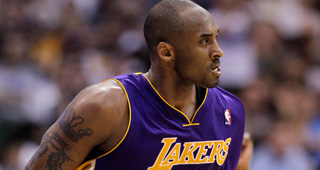 Kobe Bryant has won two championships without Shaquille O'Neal while O'Neal won one title without Bryant. Now, Bryant always lets O'Neal know about the difference whenever he can.

"I always remind him every time I see him," Bryant said. "I saw him after the All-Star Game and said, 'How you doing, 'Four'?' He said, 'Oh, you [expletive].' [Our relationship is] really good now. We have such a mutual respect for each other."

Bryant believes separating himself from O'Neal after the 2003-04 season was "inevitable." After O'Neal's departure to the Miami Heat, Bryant admits he became obsessive over winning championships without his old big man.

When asked if he ended up being the one to leave the Los Angeles Lakers instead of O'Neal, Bryant said: "I would have went some place else and won more championships. That's how driven I was. I was just that obsessed about winning without him. Everything was about that. I was obsessive about it and there was nothing that was going to get in my way."